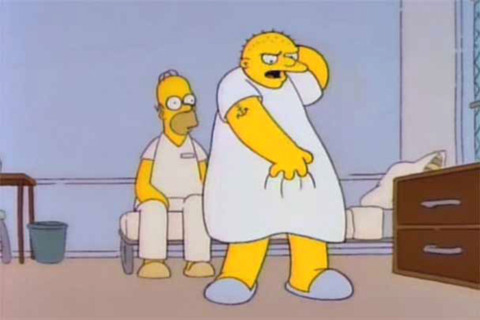 Continuing the fallout over the documentary Leaving Neverland, the producers of The Simpsons have yanked a Michael Jackson-themed episode from syndication.

The episode originally aired back in 1991 and featured Jackson providing the voice to a mental patient–depicted as a bald, overweight, Caucasian man–who also happens to believe he is the real Michael Jackson.

Over the years, fans of the series and critics have come to recognize it as one of the standout installments of the early seasons of the show; however, in light of the accusations made in Leaving Neverland, which details Jackson’s alleged pedophilic abuse of two boys, the bosses at The Simpsons feel it best to pull the episode, at least for the time being.

Oscar-winner James L. Brooks, who executive produces the show, told the Wall Street Journal “it feels clearly the only choice to make. The guys I work with — where we spend our lives arguing over jokes — were of one mind on this. The documentary gave evidence of monstrous behavior.”

Brooks also encouraged viewers not to regard the move as censorship. “I’m against book burning of any kind. But this is our book, and we’re allowed to take out a chapter.”

Leaving Neverland has ignited a fierce debate, with the Michael Jackson estate denouncing it as well as Jackson’s two accusers in the film, James Safechuck and Wade Robson.

Others in the media–including those that knew Jackson, like Oprah Winfrey–have commended Safechuck and Robeson for speaking out, as well as the documentary for its understanding of sexual abuse.