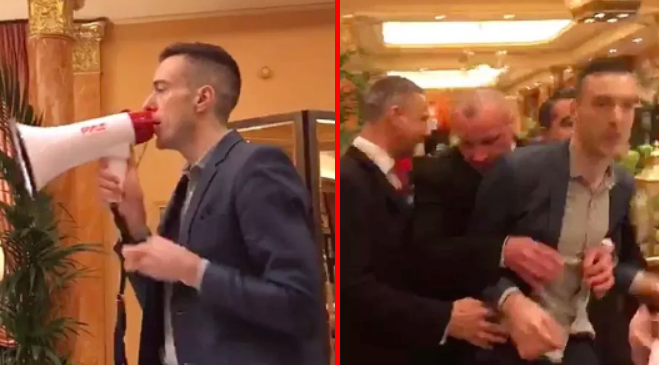 Jordan Tannahill, along with three other activists, crashed high tea at London’s Dorchester Hotel yesterday by informing patrons of the posh establishment that they were padding the pockets of a man who is currently committing human rights violations against LGBTQ people.

After being seated at a table for tea, Tannahill whipped out a bullhorn and announced that the hotel’s owner, the Sultan of Brunei, had recently implemented a law punishing gay sex with death by stoning.

“In case you haven’t heard, there’s a boycott of the Dorchester Hotel,” Tannahill shouted into the bullhorn. “On April 3rd, the Sultan of Brunei, announced a ‘stoning by death’ with any punishment of homosexuality and adultery.”

Afternoon tea protest action at The Dorchester Hotel, in response to Brunei’s newly ratified laws condemning homosexuals to death by stoning. The Dorchester is owned and operated by the Brunei Investment Agency. #boycottthedorchester

Activist Adam Eli posted video of Tannahill being dragged from the hotel by security whilst shouting “Boycott the Dorchester Hotel!” to Instagram yesterday, along with the caption: “You stone one of us you face us all!”

Protests taking place inside the @dorchestercollection hotel today because this is a GLOBAL movement. ????PLS SHARE? LONDON PROTEST TOMORROW 2PM AT THE HOTEL! You stone one of us you face us all VIDEO @cruising.utopia #boycottbrunei #queersolidarity #queerlondon #dorchestercollection #brunei

This is just the latest development in a growing outcry against Brunei’s brutal, homophobic law.

In light of the law, two Democratic Congresspeople have introduced legislation that would reinstate a federal position to help promote LGBTQ rights abroad.