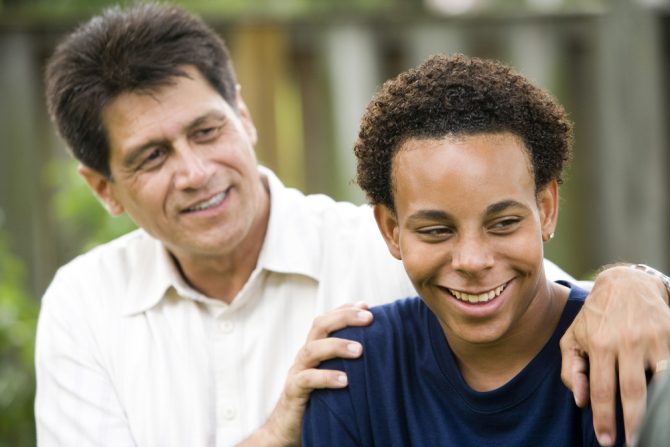 Tight quarters have led a father to realize his son is maybe probably gay and he’s not sure how to handle it, so he’s turning to Reddit for help.

In a thread titled “My son and his ‘friend’ are a couple. How do I let them know it’s okay?” the dad, a self-proclaimed “old fart who is rather on the wrong side of 40,” writes: “My boy is 20 years old. He’s absolutely my pride and joy, and there is nothing he could do that would ever make me love him less.”

He goes on call his son “uniquely kind and fiercely loyal, he’s unflinchingly brave, he’s incredibly generous and, despite the horrors he suffered as a child, he’s unfailingly positive and sunny to the last.”

Related: Mom walks in on son and his boyfriend, has awesomest response

A few years ago, the son left for college. But with coronavirus shutting everything down, including schools, he’s had to move back home. And he’s brought his “friend” along with him.

“They’ve been back for about six weeks now,” the dad writes. “They think they’re being subtle I know, but I’ve caught them doing coupley things on several occasions now.”

For instance, the dad has caught them watching TV with the lights off and their arms around each other. He’s also heard the “friend” call his son “babe” and “sweetie,” but “I pretended not to notice for the sake of saving embarrassment.” And once he’s pretty sure he walked in on them making out.

“The most solid evidence, however, came a few mornings ago,” he explains. “I get up very early to go for runs in the morning. As far as I was told, my son was sleeping in his childhood room and his ‘friend’ was in the guest room.”

“I don’t know what possessed me to do so, but on Tuesday morning I cracked my son’s door open to check on him like I used to when he was a kid. Lo and behold, they’re both asleep, snuggled up together, in my son’s bed.”

Now that it’s pretty much confirmed his son and his “friend” and, in fact, boyfriends, the dad’s not sure what to do.

“How do I let my son and his boyfriend know that I’m okay with them being a couple and they don’t have to feel like they have to sneak around in my house?” he wonders.

“I want them to be comfortable here and I want them to know I support them both no matter what. Or is that not a good idea? Am I better off leaving it alone and waiting until they tell me themselves, if they ever do? I obviously don’t want to force either of them out of the closet, but at the same time I hate feeling as if they feel like they’re being forced into the closet in my house. What’s my best course of action here?”

Cue the flood of responses. The post has received over 55,000 up-votes and 3.3K responses, with almost all of them telling the dad just how awesome he is and offering bits of useful advice.

Eventually, he updated the post with a happy ending: “He figured I knew but neither of us wanted to make the first move cause we didn’t want to make it awkward for the other.”