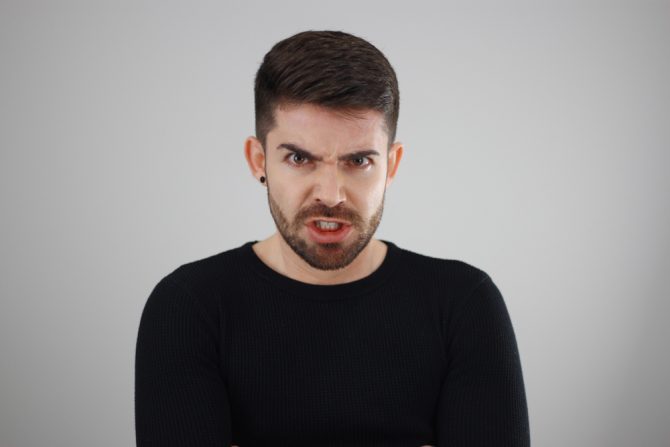 What happens when a liberal bubble gets popped by an uncomfortable encounter with unhinged bigotry?

We all know from watching the news that hatred and ultra-conservative viewpoints have become emboldened in recent years, but suddenly having to confront them face-to-face is another matter.

Marcia Wilke of Los Angeles recently learned that the hard way, but her reaction is worth paying attention to.

In an LA Times op-ed, Wilke, who lives with her wife, writes about what happened when their “delightfully diverse, liberal-leaning, bake-sale-for-charity Hollywood neighborhood” got a new neighbor — a “gay-bashing ranter” who hung “an assortment of hostile T-shirts printed with anti-feminism, anti-Islam, anti-gay and pro-1st Amendment sayings” in his front yard for all to see.”

He’d spend his time in the yard, yelling “at anyone walking by, calling them ‘progressive scum’ or ‘socialists.’ If he got no response, he would chant and sing, ‘Lock her up’ or ‘Build the wall’— for 30 minutes.”

The neighborhood felt terrorized, and Wilke and her partner were all too aware that the man was vehemently antigay.

But one day when he was locked out of his house without a cellphone, Wilke and her partner offered a helping hand.

No one in the neighborhood would open their door to him except us. My partner let him use her cellphone. He called his mom to rescue him.

He handed back the phone. “Why are you being so nice to me?”

She replied, “Oh. Human being.”

Later, when someone took down his hateful t-shirt collection and scattered them down the block, Wilke gathered and returned them to her neighbor. Instead of thanking her, the man complained that one was missing.

“I knew which one — a black T-shirt with a derogatory definition for each letter of LGBTQ,” Wilke writes.

She asked him to describe what it looked like, what it said. He wouldn’t do it.

All I know is that he wouldn’t tell me to my face the words on his gay-bashing T-shirt. He could not look at me and verbalize what he thought was his “right” to express. When it was human being to human being, the hate was unsustainable.