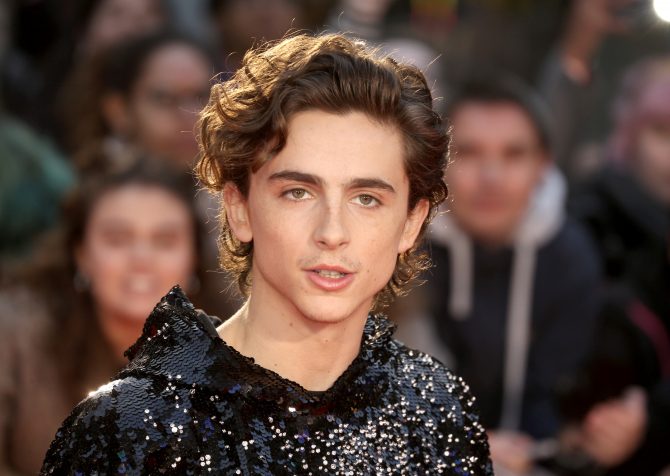 A Timothée Chalamet superfan now proudly describes his Twitter as an “accidental Wonka news and updates account” after stumbling upon a musical number being filmed at a local beach.

Dorset, UK-based Art Doherty, 21, gave fans an early look when he leaked a video of the shoot.

“Theydies and gentlethems,” he wrote, “without further ado, the main event… THEE timothée chalamet on my doorstep recording a musical number for wonka ! and i am living ! timmy nation rise!”

theydies and gentlethems, without further ado, the main event… THEE timothée chalamet on my doorstep recording a musical number for wonka ! and i am living ! timmy nation rise !!! pic.twitter.com/LswcIBSca9

The experience made an impact on Doherty, as evidenced by this followup tweet:

actual real pic of me going on a depression walk and randomly seeing that my favourite human in the world and future boyfriend is filming on the beach … im saved pic.twitter.com/3ZTxcEU4tl

Speaking to Vulture in a subsequent interview, he said: “There [seemed] to be a lot of French writing on the vehicles and number plates. So, I feel like it might be like France or Canada, but don’t hold me to that. And it looked like they were filming him getting off of a boat.

“He was chilling on the roof of a truck whilst they were getting ready to set [the scene] up and the hat kept coming off during downtime which I really loved. I just think that’s really nice, like in character/out of character. The sun was shining on [his hair]. It was bouncy and golden and even more beautiful than I could ever imagine.”

Related: Call Me By Your Name’s Timothée Chalamet opens up about THAT peach scene

Doherty added: “He [is a twink]. I’m sorry. I’m not attaching any other labels other than twink. I think you can’t disagree with that … it’s just the walk. If you’re gonna do a young Willy Wonka, he’s gonna end up being a twink by nature.

“But the joie de vivre from the walk and the way he’s just bouncing along with a little top hat and tails, it’s just twinky behavior. There’s no other way to put it. I’m sorry.”

We’re reminded of that press junket for Little Women, when an interviewer from Out magazine asked Chalamet point-blank, “How does it feel to be the straight prince of twinks and to be so beloved by the queer community?”

“Oh, my gosh,” he responded. “I want to give a serious answer or something like that, but what a good fortune.”