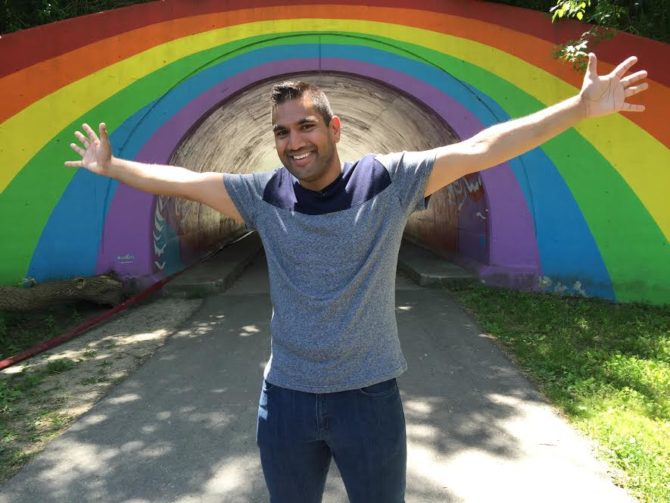 Shawn Ahmed is a Bangladeshi-Canadian blogger and activist who founded the Uncultured Project, which focuses on using social media for social good. His work has been honored by The World Economic Forum, Save the Children, and The Webby Awards. Over the years, he has also been an outspoken voice for LGBTQ Muslims around the world. He lives in Toronto.

As an openly gay Muslim, what does Pride mean to you?

Growing up in the closet within a conservative Bangladeshi-Muslim immigrant family, I wasn’t ever allowed to attend Pride. The closest I ever got was seeing glimpses of the Pride parade on TV before my parents would catch me and insist I change the channel. Even those fleeting glimpses meant the world to me. One of the things that resonated with me personally was seeing that many of our government officials and even law enforcement were among those walking in the Pride parade.

My family emigrated from a country where homosexuality is a criminal act. My family follows a faith where many believe the punishment for being gay is death. Growing up, and seeing images of leaders and law enforcement walking side by side amongst the people my family and religious community believe deserve to go to Hell meant these people were my allies even when those closest to me weren’t.

My first major Pride event was actually last year. For the first time in my life, I was able to finally attend Toronto Pride instead of watching it from afar. Pride actually fell on the Holy Month of Ramadan so I was actually fasting during both Pride and the Pride parade. The difficulty fasting meant I had to give up the chance to march in the Pride parade with some friends.

During last year’s Pride season, Omar Mateen went on a shooting rampage at a gay club in Orlando. Afterwards, you wrote a very moving column piece about it that that was widely shared online. As we approach the one year anniversary, what are your thoughts on that tragedy and its aftermath?

Orlando was over a thousand miles away. I never realized one tweet would bring this tragedy so close to home for me. Condemning the attack as an openly gay Muslim brought me a lot of hatred and a lot of death threats from fellow Muslims. The larger Muslim community has not done enough to condemn homophobia within its community. Many either condone it or fuel its flames. There are also those who see homosexuality as “Western” society thing (and the advancement of LGBTQ rights in Muslim countries as Western encroachment). It is no surprise then, whether in Bangladesh, Orlando, Manchester, and now London, Islamists often target LGBTQ people.

Everyday I’m grateful to be living in a country where police are committed to protecting people like me. It is a privilege that most LGBTQ Muslims do not–but should–have.

What are some of the most common misconceptions people in the LGBTQ community about LGBTQ Muslims? How do you respond to those misconceptions?

LGBTQ Muslims face the same misconceptions that cisgender heterosexual Muslims face–bigotry, racism, sexism, and Islamophobia. And Trump voters. The LGBTQ community isn’t as inclusive and affirming as we think it is. Many within our community mistakenly assume that, because they are a minority themselves, they have can’t possibly be prejudiced against other minorities. Responding to these misconceptions is difficult for most LGBTQ Muslims. We have the double burden of overcoming the misconceptions within the LGBTQ community while also trying to do the same within the Muslim community.

What I doing this Pride is the same thing I do all year round: be Muslim and be gay. As a Muslim, as I interpret my faith, I believe we need to make the world a better place through peace. Part of that means we need to better understand each other.

We need to understand that, within the LGBTQ community, not everyone is OK right now. Attacks on LGBTQ people are real. Islamophobia is real. Anti-black racism is real. Systemic racism is real. Pride is not just a celebration but also a political movement towards greater justice.

This year, Pride Toronto’s parade will likely be on the same day as the Muslim holy day of Eid alFitr. It is the day Muslims around the world will be celebrating the end of the month long fast of Ramadan. As a gay Muslim, I can’t help but see that as a bit auspicious. I’ll be celebrating both as a Muslim and a gay man.