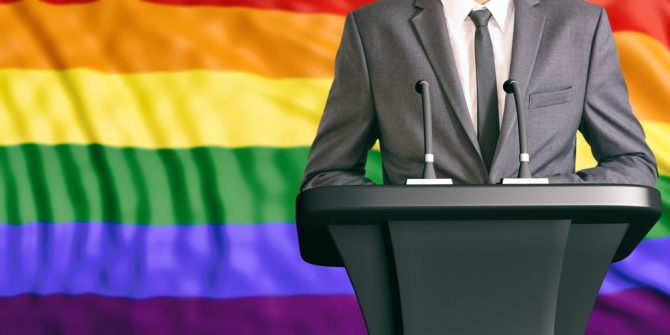 If you’re not looking back consumed in anger, you can look forward filled with hope. It may seem like the most obvious deduction, but in these fragile, polarizing times, it’s easy to forget the 33-year-old lesson of George Michael’s first solo single: You gotta have faith … and hope.

I was reminded of this while doing a podcast interview based around my recent Queerty article “Gay black lives mattered more than ever in the 2020s.” At the end of the chat, the hosts asked me about my hopes for the LGBTQ community in 2020. I was surprised that I needed a few moments to gather my thoughts. Once I collected them, they started to pour out before I had a chance to line them up in neat little rows.

As a gay, black man, I can say that the last decade was pretty good, but in the next one, we can do even better. Here are five of my hopes for the 2020s. May the 10 years ahead of us be even more productive than the 10 now in our rear view.

1. To certain people, black LGBTQ lives will finally start to matter just as much as black straight lives.

This one is for a black hetero community that remains largely defined by homophobia. For all the strides queer blacks are making in entertainment and especially in television representation, there’s still a curious lack of support for them in real life.

In the last year, we’ve seen how the black community, especially straight men, will ride or die with straight black male superstars, to the end and beyond. After Nipsey Hussle’s shooting death last year at age 33, they canonized him and turned him into a saintly martyr, conveniently forgetting how his benevolence didn’t always extend to black LGBTQ folks.

In a 2018 Instagram post, he equated gay black men with “hyper violent” black men and “abandoners”  — as in, all are scourges on blackness. In a follow-up tweet, he alluded to a gay “agenda” that allegedly has endangered straight black men, rendering them invisible.

Posthumous tunnel vision once again dominated with Kobe Bryant, a basketball superstar who was a staunch ally to many, including the LGBTQ community. After his January 26 death in a helicopter crash that also killed his 13-year-old daughter and seven others, a previously unspoken rule among blacks quickly became an explicit one: Thou shalt pretend those 2003 rape allegations against Bryant never happened.

I couldn’t help but wish the community had backed up former Empire star Jussie Smollett with half as much fervor last year when he first said he’d been attacked by two MAGA cap-wearing white guys in Chicago. Regardless of whether or not we thought his story held up, if a straight black performer, say a Kanye West or a Jay-Z, had spun the exact same story, I guarantee there wouldn’t have been a doubting Snoop Dogg, Tracy Morgan, or Chris Rock in the house.

2. There will be more hip hop accountability for homophobia.

We’re starting to get there. Last year, a rap album about a man in love with another man won the Best Rap Album Grammy, and Lil Nas X, a 20-year-old out gay rapper, scored the biggest single of the year with “Old Town Road.” The stage has been prepped and set for an ongoing revolution. By this time next year or the year after that, maybe Snoop Dogg’s son Cordell will be able to do a photo shoot exploring his feminine side, as he recently did via makeup, dangling earrings, and a lacy white blouse, and the world will shrug in much the same way we now do when a white pop star like Harry Styles does the same.

3. There will be even more viable LGBTQ political candidates.

It may have been a bit too soon for President Pete Buttigieg — not because he’s gay, but because he’s still a bit young and a bit green for the biggest job in the country. Who knows? Maybe he’ll be ready for the gig when the 2028 U.S. President election year rolls around and he’s the ripe old age of 46.

Or maybe some other seasoned and out LGBTQ candidate will beat him to it. Thanks to the South Bend, Indiana, mayor’s historic yet ultimately failed run for the Democratic Party’s nomination, what seemed implausible in 2016, now seems like a closer-than-remote possibility.

4. There will be more LGBTQ actors playing LGBTQ characters onscreen.

For its sixth and final season, Empire cast an actual trans performer, Alexandra Grey, to play trans singer Melody Barnes. Although a cis actress certainly would have been able to handle the role, the performance resonates so much more when we know that the struggles the characters talks about are the same ones the actress playing her has likely lived. It’s meta and self-referential in the most inspiring way.

5. Gays will stop helping people who don’t care about us get richer.

It’s time to let thoughtless Wendy Williams go. She didn’t write the book on black and sassy, and these days, Billy Porter and Lizzo are doing it so much better anyway.