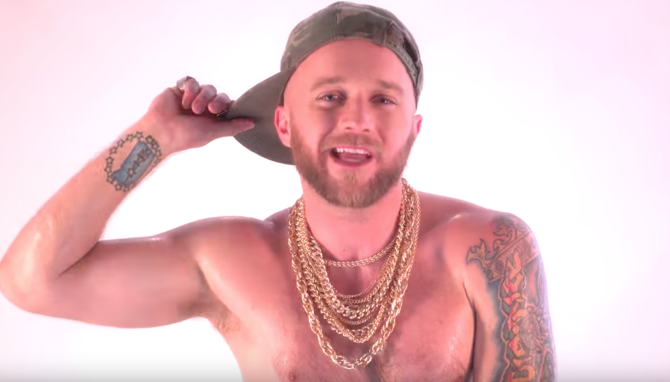 You don’t need any advanced training to spot bad behavior at bars and clubs. It comes in all shapes and sizes — everything from an impatient drinker vying for the bartender’s eye by performing a horrendous one-man show, to people puking where puke was definitely not intended to be, to everything in between.

Queer rapper and dancer Rikki Crowly, aka Rica Shay, says it’s the go-go boys and girls who are often on the receiving end of some of the worst nightlife behavior.

His latest single and video for “All Up On Me” is a direct response to people who feel entitled to act without consent, and also an anthem to stay strong and proud.

“I could go on and on about drunken guys slapping my ass, drag queens trying to pull down my underwear, and random curious fingers trying to go to private places where they don’t belong,” the Los Angeles-based performer tells Queerty. “But what it really boils down to is simple — people in clubs just can’t seem to understand consent, especially when it has to do with a person dancing on a go-go box or an individual they’ve seen in an adult film on the internet.”

@merlegmusic and I have been friends for almost ten years now. It was so much fun shooting All Up On Me with him. Can't wait for y'all to see our other collaborations. #merlegmusic #ricashay #rapper #hiphop #performer #alluponme #hotrabbit #musicvideo #hipster #fashion Styled By: @stylememuthabee Outfit by @rikvilla

“I came up with [All Up On Me] while go-go dancing in West Hollywood one night. I was inside my head telling myself things like: ‘You’re not hot enough. The other dancers are bigger. You should just take steroids,” he explains. “I get into these moods every so often while dancing, and the only way to get out of my head is by getting completely lost in the music and into the fantasy. I started chanting the hook out loud, ‘All up on me I got hands all up on me,’ to where only I could hear it. I might have looked like a crazy person talking to myself, but that’s beside the point. As I chanted and continued to pull myself out of my head my mood started to flip.”

And it’s that self-sabotage that Rica Shay is battling in his music, too. “Criticism and judgement from your peers is inevitable in life,” he says. “However, how you choose to process it is entirely under your control. For me, writing a song like ‘All Up On Me’ is essentially a cathartic way to deal with my frustrations of the industry and the stigmas attached to it.”

Stigma is never shed easily. Rica Shay helps to dismantle it through his art and by remaining an outspoken, vigilant advocate.

Check out Rica Shay’s video for “All Up On Me”, featuring Merle G, below: