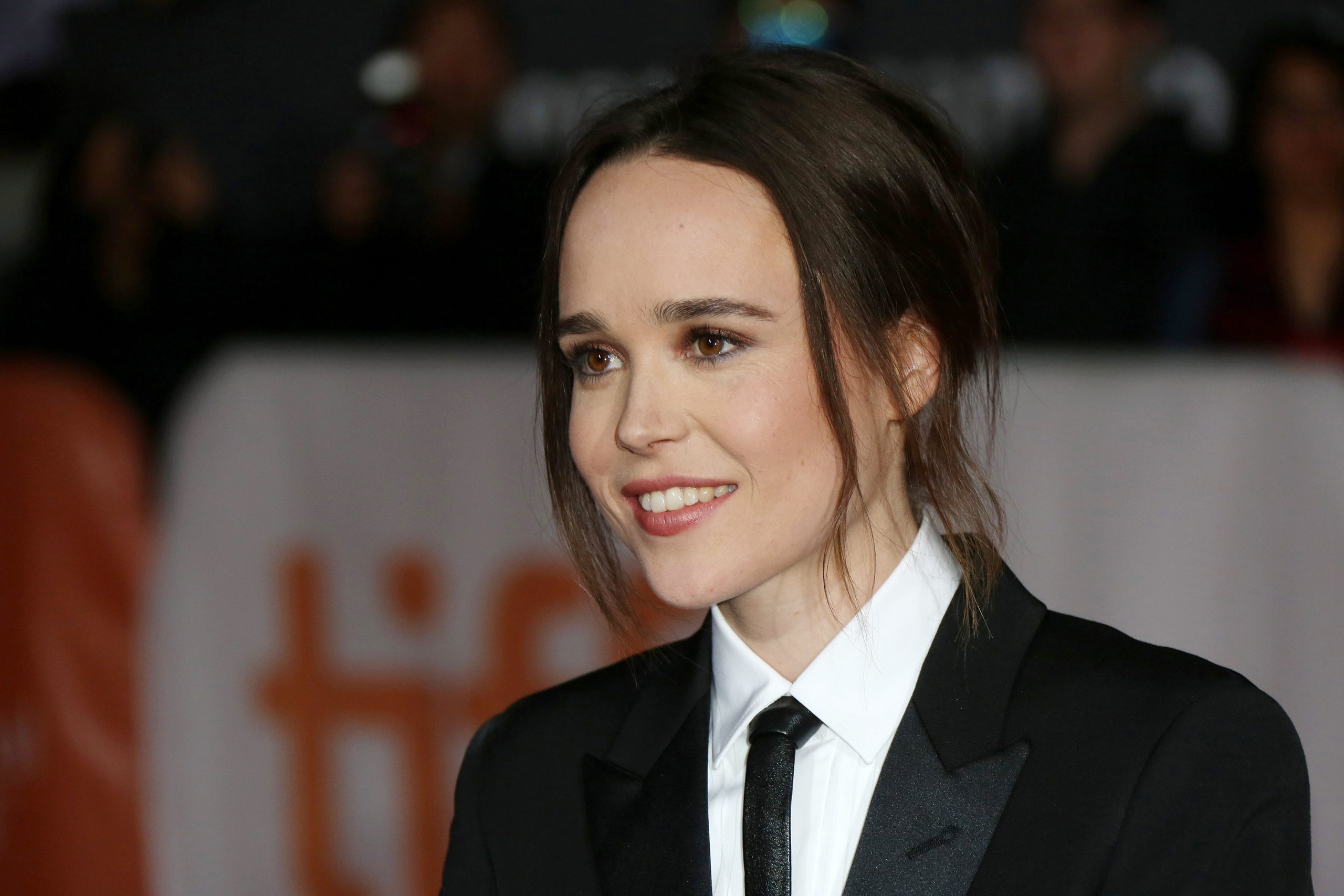 First things first. We got rid of Trump/Pence and brought in the LGBTQ friendly Joe Biden and Kamala Harris, as over 80 million Americans breathed a sigh of gay relief.

Biden vowed to make the Equality Act a priority within his first 100 days in office, and suddenly we were all singing “Brand New Day” from The Wiz, while thanking two fab lesbians—Mary Trump and Rachel Maddow—for their role in abetting this transition.

Oscar-nominated Elliot Page (Juno, The Umbrella Academy) came out as trans and one of the reasons I rejoiced is that, finally, Hollywood can’t say, There isn’t a famous enough trans actor we can use in starring movie roles anymore. In fact, maybe Elliot should take over the lead in Rub & Tug, the movie (now a scheduled TV show) that Scarlett Johansson dropped out of, after protests concerning another cis actor being cast as trans.

In other news, actor DJ Qualls (Road Trip, Hustle & Flow) came out as gay in January. No surprise there. I wrote about Qualls going to the Chelsea bar Barracuda way back in 2008. Justice Smith (Jurassic Park: Fallen Kingdom) and The Flash actor Rick Cosnett joined him in the open arena. Meanwhile, actor/singer/Corey Booker’s girlfriend Rosario Dawson came out as LGBTQ, though she said she’d never had a queer relationship, while OITNB’s Taylor Schilling came out and said she’s currently IN a relationship with musician/artist Emily Ritz.

Quelling any previous cacophony, singer Rebecca Black (known for the notoriously bad song/video “Friday”) announced that she is queer. Do we forgive her? Nikki Blonsky (Hairspray) came out by dancing to Diana Ross’s “I’m Coming Out” on TikTok, while comic/host Niecy Nash surprised a lot of people by marrying her girlfriend (it turns out Niecy is bisexual) and Raven Symone also said “I do” to a woman, Miranda Pearman-Maday. Also of note, the bisexual Sara Ramirez (Grey’s Anatomy, Madam Secretary) came out as nonbinary, with “she/they” pronouns.

Covid lockdowns had various performers moving their craft online, such as Rosie O’Donnell, who did a talk show to raise money for Actors Fund; Patti LuPone (Hollywood), Meryl Streep, and many others, who performed for Stephen Sondheim’s 90th virtual birthday celebration; and Lady Gaga, who curated and performed at the One World: Together At Home event to benefit healthcare workers and also picked up a bunch of VMAs in various extraordinary outfits, including masks, of course.

Madonna drew some flak for her social media posts—one where she sang a parody version of “Vogue” (about eating fried fish) into a hairbrush in her bathroom and another where she luxuriated in her petal-strewn tub while claiming that coronavirus is “the great equalizer.” Many less privileged people chose to disagree. Madge seemed to be going off the deep end again when she re-posted a cockamamie video full of propaganda and conspiracies about how to deal with the pandemic, a clip that was then taken down by social media for its dangerous misinformation. But she marched with Black Lives Matter and supported Biden/Harris, so all was forgiven, especially since we know how she loves her attention—and fried fish.

Moving on to fried catfish: RuPaul’s Drag Race contestant Sherry Pie (the drag character of Joey Gugliemelli) ended up in the frying pan after the brunt of the season had wrapped. It turned out that Gugliemelli had pretended to be a casting agent and in the process, lured various guys into humiliating sexual actions, claiming it could land them a job. In the process, Joey/Sherry lost his own job on the show—he was disqualified and creative editing made Sherry way less visible than she would have been.

In other TV drama, Ellen DeGeneres was under fire when complaints came out about the horrible treatment of various staff members on her daytime talk show, which some current and ex-employees described as a toxic work environment. A few producers were axed and Ellen apologized, vowing to improve things while admitting that she’s “a work in progress.”

Here’s hoping she is now as kind to her staff as she is to George W. Bush and Kevin Hart.

Not kind at all was Harry Potter author J.K. Rowling, who doubled down on transphobic remarks, as Monty Python comic John Cleese backed her up, later adding that he’s not that interested in trans people, but he hopes they’re happy and people treat them kindly. Except himself, I guess.

QUEER IN THE MOVIES

Some of the artier flicks that were served in ‘20 included Two of Us, a French drama about a pair of retired women who’ve been secretly in love for years; I Carry You With Me, a love story between two Mexican guys, spanning decades;  Summer of ‘85, Francois Ozon’s teen love story set at a tumultuous time; and The Life Ahead, the Sophia Loren-headed remake of Madam Rosa, which features an appealing trans character named Lola (played by Abril Zamora) who dances with Loren. “As a man, she’d been a middleweight boxing champion,” says Momo, the film’s central child character, with youthful inelegance.

Disney/Pixar’s animated film Onward had a lesbian police officer (voiced by Lena Waithe), who was on for a short time but managed to make hearts flutter and phobes rage. (Conversely, Out was a Pixar short film with a gay guy as the lead character.) The Prom is an all-star adaptation of the Hairspray-style Broadway musical about a small-town student who wants to bring her girlfriend to the prom and the vain actors who learn a lesson in empathy while trying to cash in on her plight, aiming to “change the world, one lesbian at a time.” James Corden plays an actor who is “as gay as a bucket of wigs” and reveals his own prom-related pain, in between trying to find a Scruff date in Indiana.

Another adaptation of a theater piece, Ma Rainey’s Black Bottom –directed by the gay George C. Wolfe–had Viola Davis as the lesbian blues singer and the late Chadwick Boesman as an ambitious musician, both garnering major Oscar buzz. In the beautifully appointed Ammonite, set in 1840s England, Kate Winslet and Saoirse Ronan go through a pretty sullen love affair, though it does kick in towards the end, so be patient and enjoy the scenery.

Another period film, Summerland, stirred up a relationship between  Gemma Arterton and Gugu Mbatha-Raw as writers whose heat is rekindled thanks to a younger male that bonds them. Set in small-town Oklahoma in 1960, To The Stars deals with parental abuse, bullying, and female bonding, while lesbian attraction also forms a thread of the highly praised coming-of-age comedy/drama The Half of It. And Happiest Season put a lesbian spin on the old holiday rom-com and nabbed big viewership, though many found it to be a lukewarm cup of soggy eggnog.

Back to the males: In Supernova, the reliable Colin Firth and Stanley Tucci star as a gay couple whose lives are rocked when one of them develops dementia. This movie has become a weighty awards contender because the Academy notoriously loves straights playing gays, especially when there is victimization involved—but it’s also gotten raves, so there’s that. Speaking of gay angst, Netflix served a film adaptation of the Broadway revival of Mart Crowley’s crackling The Boys in the Band, about an all-male NYC party full of wit and pathos. The cast of out gay actors played their parts so well that Andrew Rannells and Tuc Watkins, who were a couple in the play and film, have become one in real life.

And some closure trips brought extra benefits for their lead characters. In Monsoon, Henry Golding (Crazy Rich Asians) was an animator who returns to Saigon and in the process finds a man, while Sublet takes a travel writer (John Benjamin Hickey) to Tel Aviv, where he bonds with a young male student.

In Uncle Frank–courtesy of gay writer/actor Alan Ball (True Blood)—a gay man on a road trip to the South hides a dark secret as he desperately tries to mentor his niece.

And Stage Mother had Australian screen queen Jacki Weaver taking over her late son’s drag bar and learning valuable life lessons, though the movie sadly faded like a used eyelash.

Michael Musto is known for having written the long-running “La Dolce Musto” column in the Village Voice, for having written four books (including the nonfiction guide “Downtown” and the roman-a-clef “Manhattan on the Rocks”), and for having appeared as a TV commentator on topics both pop-cultural and political. He’s at @mikeymusto on Twitter.