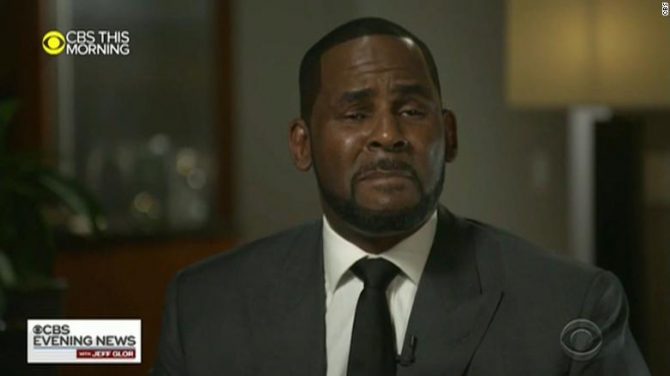 Mired R&B pop singer and accused rapist R. Kelly took to CBS this morning to address the recent charges of sexual assault against him. In short, the interview turned into a frenzied rant.

Chicago prosecutors charged Kelly with 10 counts of aggravated criminal sexual abuse on February 22. The singer has repeatedly denied any wrongdoing.

The charges come on the heels of the release of Surviving R. Kelly, a six-part documentary series detailing years of alleged statutory rape and abuse against a number of women, including his ex-wife Andrea Lee.

In his interview with CBS, Kelly invited newscaster Gayle King to his Chicago Trump Tower apartment to discuss the recent charges. Only a few minutes in, Kelly appeared to lose control.

King, for her part, maintained composure, even as Kelly began flailing his arms about in a violent manner.

“[I’ve] got little girls trapped in the basement… helicopters over my house trying to rescue someone that doesn’t need rescuing because they’re not in my house. Handcuffing people, starving people. I have a harem, what you call it – a cult. I don’t even really know what a cult is. But I know I don’t have one.”

Kelly’s remarks refer to charges in Surviving R. Kelly that the singer maintains a harem of underage women that act as a sort of cult of personality for him.

“Stop it. You all quit playing!” Kelly screamed. “Quit playing! I didn’t do this stuff! This is not me! I’m fighting for my f*cking life! Y’all killing me with this sh*t! I gave you 30 years of my f*cking career!”

Kelly’s publicist eventually had to intervene to help the singer regain his composure. When the interview resumed, Kelly went on to admit that he does date much younger women, and has dated multiple women at the same time in the past.

He also claimed that parents had offered him sex with their underage daughters, though he had refused. He blames social media for the stigma against him.

In 2008, a court acquitted Kelly of sex charges after an alleged videotape of the singer having sex with an underage girl surfaced. In 2000, documentation also emerged showing that Kelly had married pop singer Aaliyah in 1994 when she was only 15 years old. The marriage was later annulled at Aaliyah’s request in 1997 when she revealed the ceremony took place when she was underage.

Subscribe to Queerty for a daily dose of #entertainment #gayleking #r.kelly stories and more