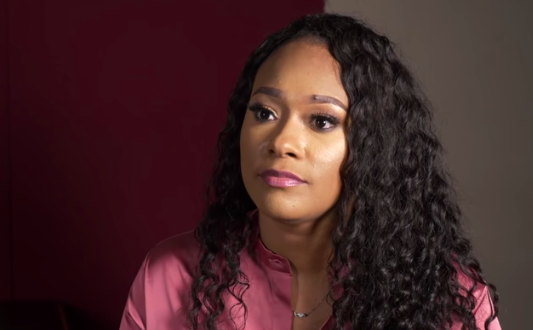 R. Kelly’s ex-girlfriend Lisa Van Allen recently sat down with DJ Vlad to talk about her experiences with the mired R&B singer and things quickly took a homophobic turn.

In the interview, Van Allen talks openly about her sexual experiences with Kelly, explaining in graphic detail what happened during their bedroom romps, and using them to raise questions about his sexual orientation.

“I know that’s a little graphic, but that’s what he does.”

When Vlad goes on to mention Dominique Gardner, one of R. Kelly’s accusers who has been described by some as “butch,” “boyish,” and a “tomboy”, Van Allen admits that it has caused her to question whether the singer might also be into boys.

“It’s not farfetched if you like things in your butt,” she says, then laughs.

Now, let’s stop right there for a moment.

Related: Straight Guy Opens Up About All The Stuff He Likes Done To His Butt

Suggesting a man is gay or bisexual simply because enjoys having his butt touched is ridiculous and, frankly, homophobic, as it implies he is somehow interior and should be judged and ridiculed for it.

And, in this particular case, it’s also not helpful.

The story surrounding R. Kelly is very serious and very sad. Throwing out unfounded accusations of homosexuality or bisexuality only serves to detract from claims made by real victims of abuse.

Chicago prosecutors charged Kelly with 10 counts of aggravated criminal sexual abuse on February 22. The singer has repeatedly denied any wrongdoing.