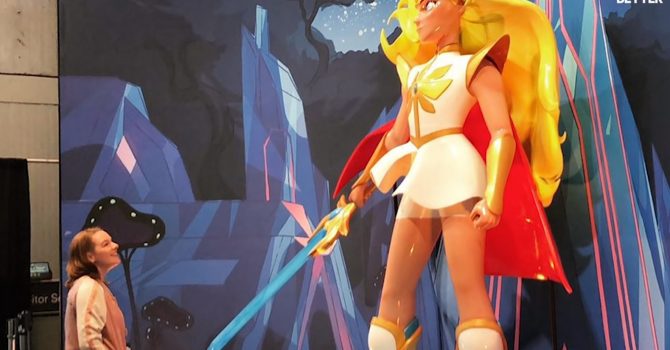 Out-writer Noelle Stevenson, who helped usher in the triumphant return of beloved gay icon She-Ra to Netflix, has opened up about her own coming out experience in a new video as part of the “It Gets Better” campaign.

Stevenson, now 27 and originally from Los Angeles, recalls seeing the original She-Ra animated series and immediately noting “this is really gay.” Prior to that in her childhood, Stevenson confesses she had little-to-no knowledge that gay people even existed thanks in large part to a lack of queer characters in television and film.

As she grew up, Stevenson began to make gay friends in high school, and later, when she attended the Maryland Insitute College of Art. “I actually had a lot of queer friends in school,” she says. “I had these people around me who were modeling how to live an open and a truthful and a joyful life as a queer person.” Those same friends eventually helped her to accept her own sexuality as a gay woman.

Stevenson also reveals that part of her interest in She-Ra comes from the original series’ buried queer themes. She wanted to explore those same ideas in the reboot, creating a world where queer life was accepted and explored on the same level as heteronormative life, and create an inclusive show for a new generation.

“My advice to anyone who is searching or questioning or looking for a community is to find the people who have lived these experiences, who are also searching or also questioning. Build those relationships…reach out to people. I hope I can be that person, and that this show can be, in some ways, that safe space you might need.”