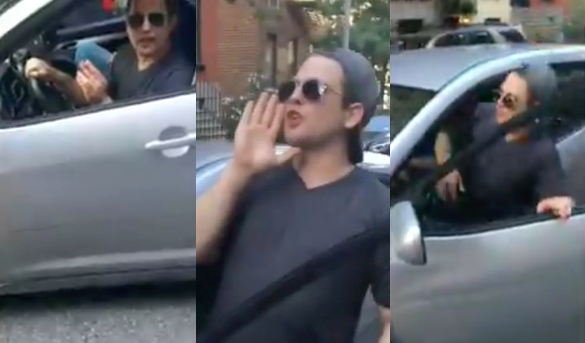 A racist gay man in New York City was caught on tape shouting the N-word at someone and then assaulting a pedestrian.

In the footage, the motorist is seen stepping out of his vehicle and screaming the “N” word at someone in his way, before turning and assaulting a pedestrian who captured the slur on video.

“Hey, it would be smart to get out of the street a**hole. F*cking n*gger!” he yells before climbing back into his car and smoking a cigarette.

When he sees he’s being recorded, he looks at the man behind the camera and says, “Are you recording me? Why?”

“Cause you’re an a**hole,” the pedestrian replies.

“I’m an a**hole?” quips the motorist. “Honey, look in the mirror, okay? The only person that’s an a**hole is you for recording me.”

To which the motorist responds, “I know I am, thank you. Are you gay, too? No, you’re not? Well, you look like it! Do you want to keep recording me having fun? What are you gonna do with this recording, tell me.”

“I’ll just put it on the internet,” the pedestrian replies.

The two continue bickering for a while before the motorist threatens to “beat the sh*t out of you.” When the pedestrian tells him to “give it a try,” the motorist jumps out of the vehicle and lunges at him.

He grabs the pedestrian’s phone and throws it across the street. Unfortunately for him, there was another person nearby filming the whole thing from a different angle.

“Racist on the Upper East Side,” he wrote. “Find out who this racist person is and let us hold them accountable. This and any other act of racism will NOT be tolerated.”

Racist on the Upper East Side. Find out who this racist person is and let us hold them accountable. This and any other act of racism will NOT be tolerated.

As City Council Member of #District45, I will be holding these racists accountable.https://t.co/41nCXEP0Fq pic.twitter.com/ariaOSFGF4

Related: Vile woman coughs on couple for asking her to wear a mask at a grocery store

WATCH: Todrick Hall gets into the holiday spirit with “Bells, Bows, Gifts, Trees”

caught in the act
1.4K shares