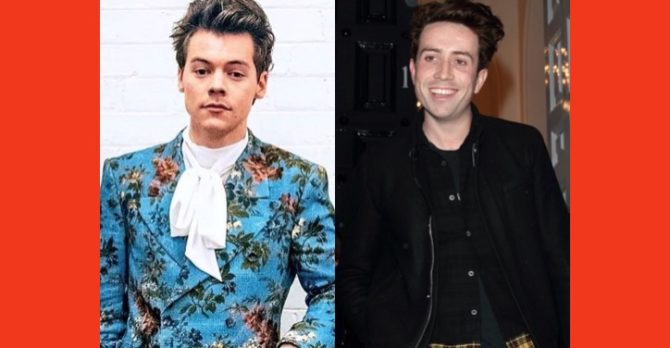 Ever since he maybe sort of came out as bi in the lyrics to a song, the Harry Styles Rumor Mill (TM) has been churning at an even higher output than usual.

But even before the cryptic coming out, one story that continued to stick is Styles’ connection to out BBC radio host Nick Grimshaw.

Now Grimshaw, 33, has addressed them head-on.

Appearing on The Dan Wootton Interview podcast, Grimshaw was again asked if their friendship had ever been romantic.

He continued: “It was an odd, odd thing to happen. It wasn’t very weird at the time, it’s weirder now.

“At the time, you’re just getting on with your life and you’re doing the radio and just hanging out and you’re like, whatever.

“But it was weirder when he came on to do the solo stuff and I started doing my Harry research, writing questions and stuff, and when I Googled him I was like, ‘This is actually a thing!'”

The BBC Radio 1 host also had some thoughts about how this false narrative gained so much traction.

“I don’t know if it’s because we were both Northern and had quite a similar sense of humor and because he was down in London and away from northerners and friends and family and we all just ended up hanging out together and getting on,” he guessed.

“I think that people assumed that because I was gay and he wears like floral shirts that he must be gay, and they were like they must be going out with each other.

“But I don’t know, it was something we never actually discussed together.”