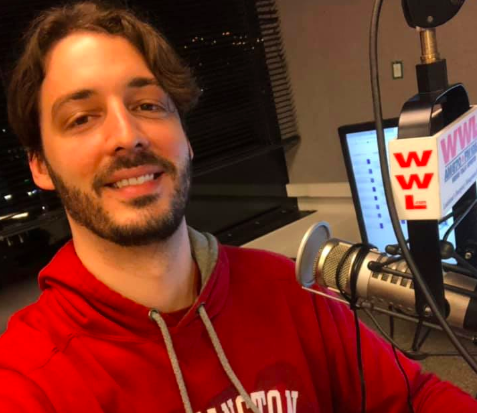 Seth Dunlap is the host of the weeknight sports show “The Last Lap With Seth Dunlap” on WWL Radio in New Orleans. He’s also gay.

Last week, he published an open letter to New Orleans Saints quarterback Drew Brees about his partnership with the antigay hate group Focus on the Family.

“This is tough,” Dunlap wrote, “but staying true to myself means empathizing & educating with the platform I have. My Open Letter to @DrewBrees about why his ‘Focus on the Family’ video, and his reaction today, was hurtful to many people, including me an openly gay man.”

This week, Dunlap was called a “f*g” by someone with access to the radio station’s official Twitter page, which has over 30,000 followers. 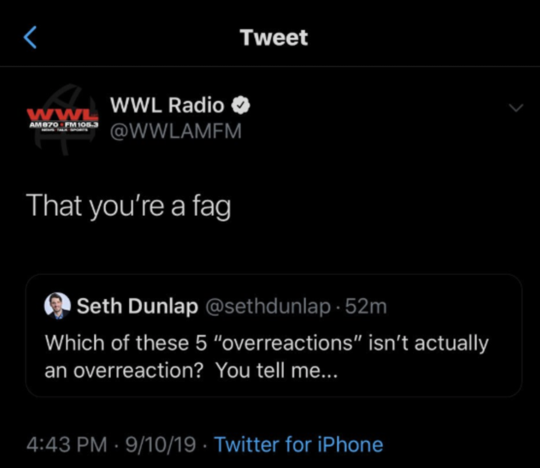 It took several hours before the homophobic tweet was deleted, but not before it was screen grabbed and circulated across social media.

It took another several hours for WWL Radio to release a statement, saying: “We are aware of a tweet that went out today from the WWL account. The content of the tweet is categorically offensive and abhorrent to the station. We are actively investigating this incident and will take swift and appropriate action once we determine how this occurred.”

We are aware of a tweet that went out today from the WWL account. The content of the tweet is categorically offensive and abhorrent to the station. We are actively investigating this incident and will take swift and appropriate action once we determine how this occurred.

As you may recall, Brees came under fire last week when it was revealed he had been working with Focus on the Family in various capacities since 2010, appearing on its radio program, being profiled on its official blog, and, most recently, filming a video for the organization to promote “Bring Your Bible To School Day” on October 3.

“Bring Your Bible To School Day” was an event specifically created by Focus on the Family to combat pro-LGBTQ events that happen in schools around the same time of year, including LGBTQ History Month (October 1-31), National Coming Out Day (October 11), and Spirit Day (October 20).

When confronted about his nearly decade-long affiliation with the hate group, Brees feigned ignorance then blamed the media for writing nasty headlines about him and declined to apologize to his LGBTQ fans who were upset.

What happened to Dunlap is a direct result of Brees refusing to accept responsibility for what he did. By not apologizing and instead blaming the media for reporting the truth about him, he emboldened someone at WWL Radio to attack an openly gay media personality in the most public of ways.

Queerty has reached out to Dunlap for comment and will update this story if we hear back.