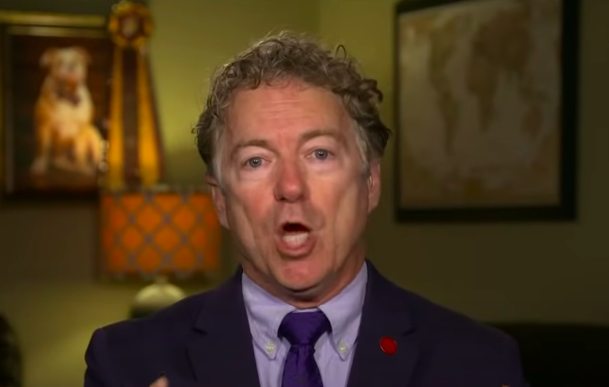 Another day, another claim by Rand Paul that someone, probably a Democrat or an “Antifa terrorist”, is plotting to kill him.

The antigay, anti-science senator from Kentucky says he has received not one, not two, not three, not four, but five–five!–death threats in the last week. And it all has to do with his beef with Dr. Anthony Fauci, who he’s angry at because he won’t embrace the coronavirus Wuhon lab leak conspiracy theory.

“This week, I’ve had five death threats just for being outspoken on it,” Paul said on Fox News on Friday night. “I don’t know what the world’s coming to.”

He continued, “You can’t ask honest, difficult questions that in the end have proved out that Dr. Fauci was not being honest with us, but as a repercussion, my family had white powder sent to our house, and five death threats phoned in.”

(For the record: Dr. Fauci has been honest. It’s Rand who’s been lying.)

Last week, a package containing white powder awas delivered Rand’s house. An initial test determined the substance was not dangerous, but that didn’t stop him and his wife, Kelley, from rushing to Twitter to say someone was plotting to have them assassinated.

The couple blamed adult contemporary singer Richard Marx, best known for his 1989 worldwide hit single “Right Here Waiting,” for being responsible after he said something mean about Rand on Twitter.

Last August, Rand said a “crazed mob” tried to murder him and Kelley in cold blood while they were walking from the White House to their hotel after Donald Trump’s RNC speech.

Video of the incident, however, showed the couple walking down the street completely protected by a wall of police officers as a group of about a dozen reporters and perfectly peaceful protestors snapped photos and pleaded with him to speak up in support of Black Lives Matter.

When the U.S. attorney for the District of Columbia and the FBI both decided not to pursue an investigation into the matter, Rand went ballistic on Twitter, raving about how “the thugs who attacked my wife and me” were walking free.

Since claiming he received five death threats last week, Paul has made multiple appearances on Fox News and has been obsessively tweeting about Dr. Fauci, calling him a “massive fraud” and a “flip-flop,” accusing him of peddling “science fiction,” and suggesting his “days are numbered.”