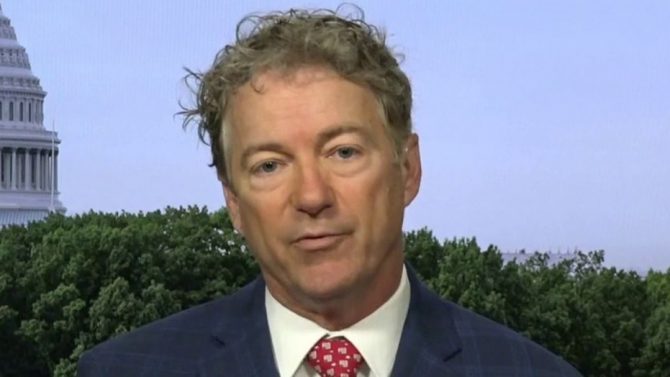 Senator Rand Paul of Kentucky narrowly escaped death last night as he was walking back to his hotel from the White House after Donald Trump’s RNC speech.

At 12:39 in the morning, Paul tweeted: “Just got attacked by an angry mob of over 100, one block away from the White House. Thank you to @DCPoliceDept for literally saving our lives from a crazed mob.”

A crazed mob of over 100 people that tried to kill him?! That definitely sounds very, very scary. Not to mention, incredibly dangerous. We’re glad the antigay senator and his wife made it out alive.

Why, yes. Yes, there is. And it turns out, Rand’s account of what happened is a complete fabrication.

Not long after he claimed he and his wife were nearly murdered in cold blood in the streets of Washington, DC, numerous videos began circulating that showed a very different scenario.

Footage shows Rand walking alongside his wife and completely surrounded by a wall of police while a group of about a dozen reporters and perfectly peaceful protestors snap photos, shout questions, and plead with the senator to speak up in support of Black Lives Matter.

There were no pitchforks. There were no torches. Neither Paul nor his wife were ever touched during the police escort, though one officer who was protecting them did get jostled by a protester at one point.

D.C. police officers had to escort @RandPaul to the Hotel Washington as dozens of demonstrators followed and jeered him. At least one person is being treated by protest medics for what appears to be an OC spray injury. pic.twitter.com/fOrKQ2C29D

After the videos surfaced, people began calling out Paul on Twitter for being a liar and drama queen.

Rand Paul is acting like he was somehow violated by a violent mob. Nobody touched him. He was just a little to close to the people he has shit all over by enabling Trump, for comfort.

He should be uncomfortable all the time until he upholds his oath.pic.twitter.com/fkdOxckPp8

US Senator Rand Paul is so unaccustomed to being confronted and held accountable, that protesters’ WORDS made him feel like he’s been “attacked.”

No one laid a finger on Rand Paul last night and we get incessant crying from conservatives.

Breonna Taylor was murdered in the middle of the night by plainclothes cops who lied to a judge to obtain a no knock warrant, and we get silence from conservatives.

Raise your hand if you think @RandPaul needs this. ✋ pic.twitter.com/FKk3U5zx6S

People: GOVERNMENT SHOULD FEAR THE PEOPLE, NOT THE OTHER WAY AROUND, WHICH IS WHY I OPEN CARRY

[Rand Paul gets yelled at while walking down the street]

Same people: OK, SCARING POLITICIANS IS ANTI-AMERICAN AND SHOULD BE OUTLAWED

Rand Paul was elected by the people and works for the people. We pay his salary.

Last night was simply his annual performance review. And fuck him.

RAND PAUL LIVES IN DC AND HAS A CAR SERVICE. YOU KNOW THIS WAS STAGED, RIGHT?!?!

So Rand Paul, lover of the Constitution, wet himself when a group of citizens exercised their right to free speech and sought redress from their representatives.

Then this morning, Paul–looking awfully tired, we might add–doubled down on his “I was nearly killed!” narrative when he went on Fox & Friends to call for the “paid anarchists” who threatened his life to be imprisoned.

Seriously, this man can have a whole stadium of seats.

Related: Everyone’s talking about Melania’s venomous glare at Ivanka during the final night of the RNC