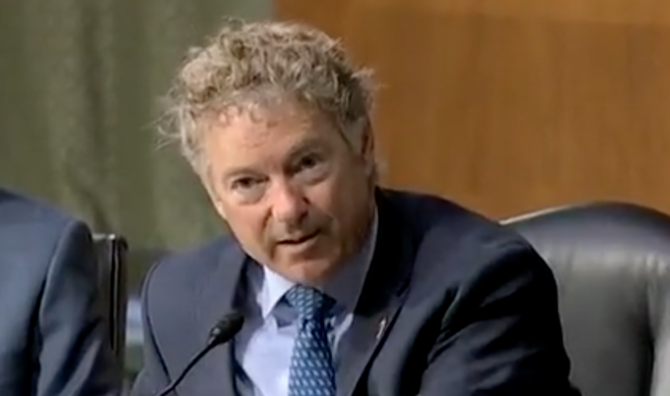 Senator Rand Paul is being widely condemned for remarks he made Tuesday during a Senate hearing with Secretary of State Antony Blinken about the Russian invasion of Ukraine. The comments have been blasted as “propaganda” for Russian President Vladimir Putin.

Emphasizing his opposition to Ukraine becoming part of NATO, Paul argued that U.S. soldiers would be “fighting in Ukraine” if the country joined. He called the scenario “something I very much oppose.”

“If you look at the countries that Russia has attacked,” Blinken told Paul, “over the last years: Georgia…Moldova, and then repeatedly in Ukraine, these are countries that were not part of NATO. It has not attacked NATO countries for probably very good reasons.”

BLINKEN: If you look at the countries Russia attacked, these were countries that were not part of NATO

RAND PAUL: You could also argue the countries they’ve attacked were part of Russia

BLINKEN: I firmly disagree. It’s the right of these countries to decide their future pic.twitter.com/4ZeZOVrK0i

That led to this stunning response from Paul: “You could also argue that the countries they’ve attacked were part of Russia.”

After a pause, Paul added, “…or were part of the Soviet Union.”

“I firmly disagree with that proposition,” Blinken said. “It is the fundamental right of these countries to decide their own future.”

Kentucky state Rep. Charles Booker, who is running to win the Democratic nomination for Paul’s Senate seat, tweeted: “Rand Paul just attempted to justify Russia’s invasion of Ukraine. He is actively pushing Putin’s propaganda in the Senate, and I will remove him from office in November.”

He is actively pushing Putin’s propaganda in the Senate, and I will remove him from office in November.

And that was one of the more tame reactions.

Rand Paul should be EXPELLED for parroting Russian talking points. When are we going to get serious about traitors in our midst?

Senator Rand Paul is suggesting Russia was justified in its invasion of Ukraine.

Rand Paul is a piece of shit.

Rand Paul literally just promoted Vladimir Putin’s propaganda by suggesting that Russia was justified in its invasion of Ukraine.

Dear Rand Paul, So because Alaska was once a part of Russia, does that mean Russia can attack Alaska with impunity? My god you’re a fucking tool and a traitor! @TheRickWilson

If you open a Russian nesting doll, inside you’ll find Rand Paul.

Today, bathroom rug head Rand Paul confirmed once again that he’s in Putin’s payroll after trying to justify the brutal attack on Ukraine, but then again, Rand has always openly promoted himself as a treasonous piece of shit. What an evil scumbag.

Retweet if you think we would all be better off without Rand Paul in the Senate.