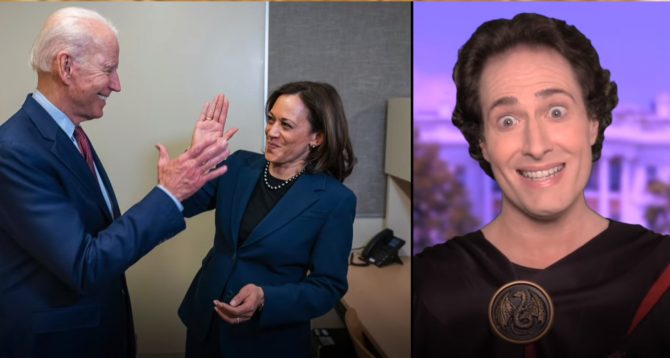 Harris made history when Vice President Joe Biden announced her as his running mate, only the second time a Democratic ticket has promoted a woman in the #2 slot. Harris also made history as the first African-American and Indian American woman to run on a major party ticket.

For Rainbow, Harris’ emergence gives him a reason to celebrate. Parodying the classic show tune “Camelot” from the titular musical, Rainbow croons out “Kamala,” recounting some of Harris’ biggest achievements in her career.

Related: WATCH: That time Shangela taught Kamala Harris how to clack a fan at a gay bar

“In his pants, Mike Pence just made a pee-pee. He’s scared-a-her,” Rainbow sings. The lyric refers to Pence’s bizarre refusal to meet or speak with any woman without his wife present. For this year’s Vice Presidential debate, he’ll have to do just that to match wits with Harris.

Rainbow then goes on to recall how Harris made Jeff Sessions and Brett Kavanaugh squirm during Senate testimony. That’s good enough for us.

“Then meet my new mom and daddy: Joe and Kamala,” Rainbow concludes, urging viewers to vote in November.

Believe us, we will be there November 3. For Joe and Kamala.