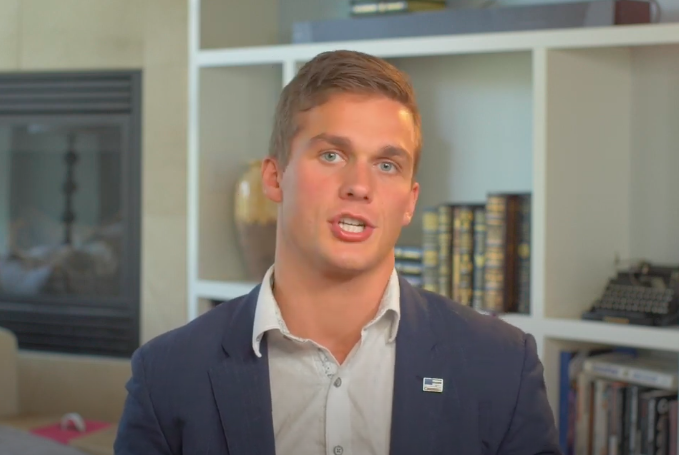 Rep. Madison Cawthorn has been accused of sexual harassment, misconduct, and other inappropriate behavior by more than 30 of his former friends, classmates, and acquaintances.

A damning new report from Buzzfeed alleges that the Nazi enthusiast from North Carolina harassed multiple woman during his single semester at Patrick Henry College, a small Christian campus in Virginia, back in 2016.

The accusations include the homophobic lawmaker calling the women demeaning and derogatory names in public, interrogating them about their sex lives, forcing them to sit in his lap, and grabbing and kissing them without their consent, among other things.

Madison Cawthorn is yet another Republican with a past of sexual misconduct or as The Republican Party calls it "A Prerequisite."

Perhaps the most alarming of the allegations involve Cawthorn luring women into his Dodge Challenger, locking the doors, and then driving them “to the middle of nowhere.”

According to more than a dozen people — including three women who had firsthand experience and seven people who heard about these incidents from them at the time — Cawthorn often used his car as a way to entrap and harass his women classmates, taking them on what he could call ‘fun drive’ off campus. Two said he would drive recklessly and ask them about their virginity and sexual experiences while they were locked in the moving vehicle.

Cawthron’s reputation got so bad that school’s resident assistants, charged with managing the dorms, warned female students “not to go on joy rides with him because bad things happened on those joy rides,” according to one former RA.

Other allegations made against the lawmaker include driving recklessly after a woman refused to talk to him about her sex life, and repeatedly flirting with another woman despite her telling him she had a boyfriend and then parking outside her dorm so he could yell comments at her when she stepped outside.

Seeing a lot of Democrats today correctly saying that Andrew Cuomo should resign. Not seeing a single Republican saying a word about Madison Cawthorn

But it’s not just women who are accusing him of giving off what one acquaintance describes as “rapey vibes.”

Not only that, but the classmate claims Cawthorn would brag about taking women out on car rides, which he described as “conquests,” and touching them between their legs because “girls like that stuff.”

Cawthorn’s office chose not to comment on Buzzfeed’s article and instead sent remarks the 25-year-old had made on the campaign trail last September: “I have never done anything sexually inappropriate in my life.”

Madison Cawthorn is a sexual predator? I did nazi that coming. https://t.co/eMHB8Qr9Mm

Anyone joking about how Madison Cawthorn can't sexually harrass people anymore because he's disabled has clearly never spoken to a multiply marginalised disabled person trying to exist in disabled spaces.

To be fair, there was only a 100% chance Madison Cawthorn was a rapey Nazi-bro in college.

Madison Cawthorn's communications director Micah Bock has locked his Twitter account. According to that Buzzfeed article, he was accused of sexual assault in college. Part of the "douche crew"

Republicans leave trashing Cuomo for us.

Clean out your own trash, Madison Cawthorn first.

Of all the things I’ve heard about GQP Nazi Madison Cawthorn such as him lying about military service and praising Hitler, I’m not surprised to hear about his college classmates saying he sexually harassed women. He’s a deep trench of toxic waste aka your standard GQP Republican.

The LEAST surprising thing I have learned in 2021 is that Madison Cawthorn is a sexual predator.

Republicans: Andrew Cuomo is sexual predator and should resign