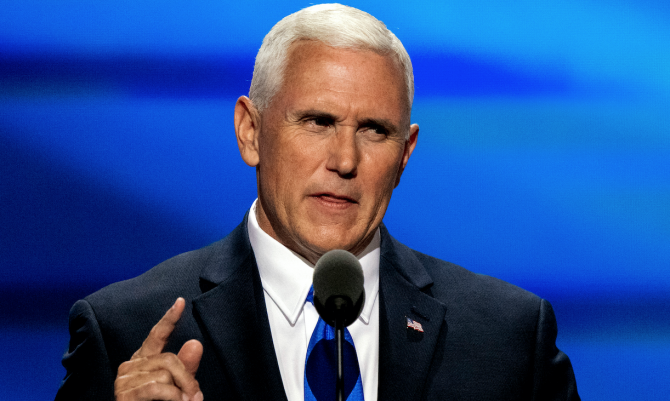 In 2017, The New Yorker published a damning profile on Mike Pence in which Trump “jokingly” said Pence wants to “hang all the gays.” That inspired readers to go dig in the Internet’s dirt in search of Pence’s other past offenses towards the LGBTQ community — not that you have to dig too deep.

As the head of the Indiana Policy Review in the 1990s, Pence published numerous articles urging employers not to hire gay people, compulsively churning out copy like this:

“Homosexuals are not as a group able-bodied. They are known to carry extremely high rates of disease brought on because of the nature of their sexual practices and the promiscuity which is a hallmark of their lifestyle.”

In that article — which you can read here — he also suggests homosexuality is a “pathological condition.”

In Pence’s ideal world, there would be zero protections for the LGBTQ community, a point he made clear by complaining about the passage of the Matthew Shepard Hate Crimes Bill.

As we reported last year, he groused when the Matthew Shepard and James Byrd Jr. Hate Crimes bill was signed into law in 2009.

Pence didn’t cite legal objections, either. Instead, he complained that it advanced a “radical social agenda” and would have “a chilling effect on religious expression, from the pulpits, in our temples, in our mosques and in our churches.”

Of course, in Congress Pence voted against federal workplace protections. What was unique was his reasoning, which was that ENDA would discriminate against Christians. To comply with the law, Pence claimed, “the employer has to ban employees from having a Bible at the workplace for their break time, or displaying Bible verses.” Foreshadowing the Indiana religious liberty law, he went on: “We must stand for the right of every American to practice their faith according to the dictates of their conscience, whether it be in the public square or in the workplace.”