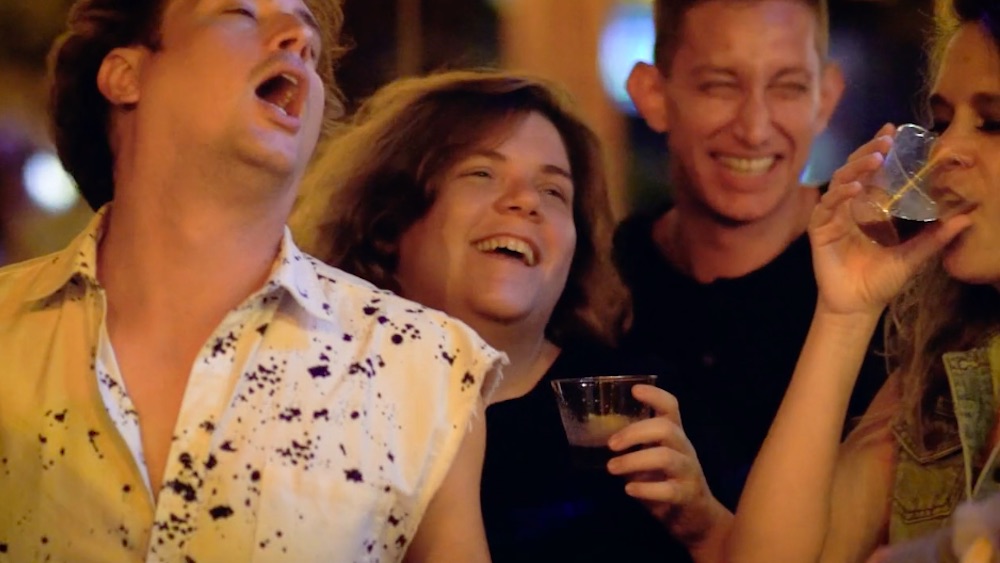 Jodie is 36-year-old traveling nurse living in Los Angeles. Her closest pals are a gaggle of guys who like getting drunk. At home alone, she looks at other people’s idyllic vacations and love lives on social media and gets harassed on a dating app by a guy who calls her things like a “f*ck*ng bi-polar c*nt” and a “white trash pig.”

The film, which premiered at the 2019 SXSW Conference & Festivals earlier this month, is mostly based on the experiences of one of the directors’ female friends. In fact, the abusive text messages that Jodie receives in the film were taken from real-life texts that the directors’ pal received.

When asked why they made a film focusing on fruit flies, Holt tells Queerty, “Basically we saw these strong capable women who were doing things with their lives face a lot of pressure from social media or from their families or their peers to be getting married and having children. As females have been allies to us, we wanted to be allies to them as well and confront these issues because we didn’t see a lot of people talking about it.”

Jodie just wants to buy an RV and travel the west coast, but her sister thinks she needs to “give dating a chance” and find a boyfriend. Frustrated with life, she drives to a Guns N’ Roses concert several hours away. Afterwards, drinking alone in a parking lot, she unexpectedly meets Dustin, a fellow rock-and-roll fan she finds attractive.

But she’s so desperate for connection that when her romantic overtures don’t go exactly as she hopes, she consults with her gaggle of gays about whether anonymous sex might make her feel less alone.

“It’s all an illusion,” comedian Michael Henry tells her, starring as one of Jodie’s gay friends in the film. “Just because we’re texting men all the time and getting loads up the *ss doesn’t mean we’re not lonely.”

Jodie isn’t your usual idealized gal pal. She’s far from perfect: She drinks too much, is quick to anger and lies when people ask how she’s doing. But the directors say they wanted to make her relatable more than likable.

It’s refreshing that they focused on a large-bodied woman and show her undressed and being sexual in a natural, matter-of-fact way. Apart from her aforementioned troll, no one comments on her weight. The directors had worked with lead actress Anna T. Schlegel before and chose her for her talent and comfort in her own skin. In real life, Schlegel is a proudly outspoken and self-declared fat person and in the film she delivers a powerful performance, alternating between pitiable and hilarious, even as Jodie seems unable (or unwilling) to change her life situation.

Probst tells Queerty, “I think of a lot of the ways I gained confidence myself and a lot were from my female friends. I feel like they saw themselves in me and I see myself in them as well. And these allies are people who aren’t necessarily going through the same experiences as us, but they have so many parallels with us in ways that we can’t help but empathize with.”

He continues, “Many people we know who are also gay have had a lot of really great female allies who have lifted us up at times when we didn’t really even have the strength to lift up ourselves. So what the film allows us to do is to respond back in that way at a time when they might not have been able to do so as well.”

Here’s a trailer for Pig Hag: