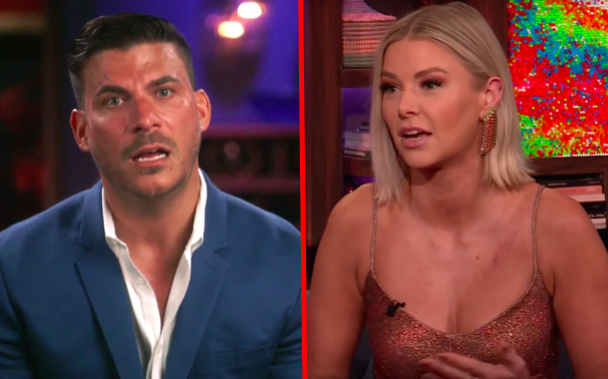 Weeks after being outed by her castmate on live television, Vanderpump Rules star Ariana Madix is finally breaking her silence.

Just to recap: The drama began earlier this month when bartender Jax Taylor outed Madix  for “liking women” during an appearance on Watch What Happens Live!

“She likes women,” Taylor grumbled when asked about Madix’s relationship with her boyfriend. He quickly followed the remark up by saying “Sorry. I didn’t mean that. I’m sorry.”

But by then the cat was already outta the bag.

When Andy Cohen asked, “You think Ariana likes women? What do you mean you didn’t mean it? You just said it,” Taylor quipped, “Just own it. That’s fine. Just don’t lie about it.”

Jax Taylor is a truly garbage human, shit like this is gross #WWHL #PumpRules https://t.co/vihVqWE6fg

But this wasn’t the first time Taylor has used a person’s LGBTQ identity as a weapon against them. Last November, he hurled antigay remarks at a fan on Twitter then claimed he couldn’t possibly be homophobic because he used to live in West Hollywood and 50 percent of his friends are gay.

After the show aired, Madix took to Twitter to set the record straight, letting everyone know that, yeah, she’s bisexual. And so what?

“I DO like women AND men. it’s called being bisexual,” she tweeted. “Ever heard of it? #thisisnthard”

i DO like women ? AND men. it’s called being bisexual. ever heard of it? #thisisnthard pic.twitter.com/bJwC0VWmZe

This week, Madix stopped by Watch What Happens Live! to talk about the situation. When asked how she felt about what Taylor did, she didn’t hold back.

“I thought it was really gross,” she said. “And I also thought it didn’t make any sense on any level.”

Madix went on to say that she has been “very open and honest” about her sexuality and that it’s never been “an issue” in her life.

“And it’s certainly not an issue in my relationship,” she added, “so I think he should just chill out.”

After the episode aired Monday night, Taylor went back on the attack.

In a tweet, he called his Madix the “most negative person I have ever met” and insinuated that she hasn’t been completely forthright about her life on Vanderpump Rules.

“Must be nice to be on a show and dodge everything about your relationship life for 9 years and tell production ‘I am not talking about that’ but still wants a paycheck,” he tweeted. “That’s my response to Ariana. Most negative person I have ever met.”

Must be nice to be on a show And dodge everything about your relationship life for 9 years and tell production “ Iam not talking about that” but still wants a paycheck. That’s my response to Ariana. Most negative person I have ever met.