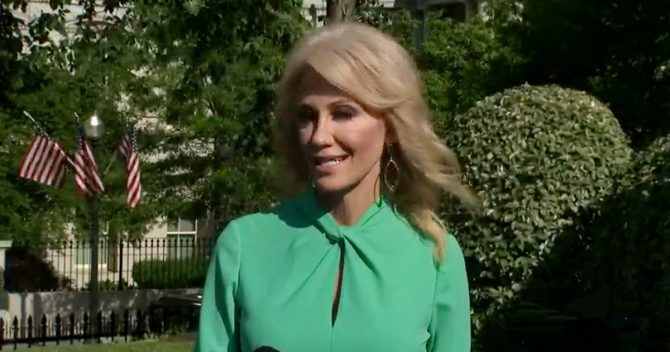 It’s been a while since we’ve heard from White House counselor Kellyanne Conway. We had almost forgotten how truly deplorable she is. Almost.

Then this morning she went on national television to defend Donald Trump‘s repeated use of the racist term “kung flu” when talking about coronavirus.

When asked for her reaction to Trump using the racist nickname twice in just four days–first in Oklahoma and then again in Arizona–Conway replied, “My reaction is that the president has made very clear that he wants everybody to understand, and I think many Americans do understand, that the virus originated in China.”

She added, “And had China been more transparent and honest with the United States and the world, we wouldn’t have all the death and destruction that unfortunately we’ve suffered.”

This is the exact opposite reaction Conway had back in March when it was first reported that an “unnamed White House official” (read: Donald Trump) had used the racist phrase behind closed doors. At the time, Conway called the phrase  “wrong” and “highly offensive.”

When Jiang then asked Conway to “walk her through” Trump’s logic of calling it the “kung flu” virus, Conway quipped, “You can ask him, how is that?” Then she accused Jiang of “stoking” the issue.

“I’m here to solve things not stoke them,” she said. “You did the opposite on this issue.”