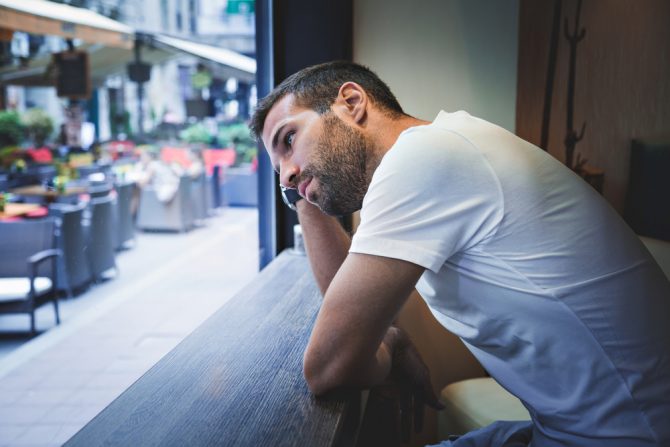 A Reddit user is having an identity crisis of sorts, worried that he’s straight despite all the evidence to the contrary.

“So I’m 20, and I’ve known I was gay since I was like 11,” he wrote in a recent post. “But there’s a part of me that thinks of myself as a straight person ‘pretending to be gay,’ that I somehow convinced myself to be gay when I was 11 because I found a boy attractive one time.”

He continues: “I know this is totally irrational because I’ve been in a gay relationship for 3 years, I regularly have gay sex and enjoy it, I don’t have any interest in women. But I find it really hard to shake that feeling that I’m just pretending, even though I know it makes no sense.”

“And when people say things like, ‘Oh, you don’t seem gay,’ it hits pretty hard and makes me feel really uncomfortable because it brings those feelings back to the surface. Is this just like internalized homophobia or something? Anyone have any tips on how to get rid of it?”

Commenters on the post were quick to point out that homosexuality is not homogeneous.

“Realize that being gay only means you find men attractive,” one wrote. “This notion that you need to act a certain way or not be yourself to fit in with the clique is just plain wrong. You are who you are, there’s no need to feel guilty about it.”

“There’s no stereotypical way to act gay,” added another. “No one suspects I’m gay because they always say, ‘You don’t act gay,’ and that’s stupid. You don’t need to be feminine or flamboyant or run through a room with a rainbow flag.” [Ed. note: Not that there’s anything wrong with that!]

Multiple commenters, meanwhile, advised the original poster to seek outside support. “A therapist can help you work through this uncomfortable feeling that you know you want to change but are not sure how,” one wrote.

Related: Gay guys reveal whether or not they got to “live out their youth properly”

Perhaps the moral of the story is that we should work harder to separate gender expression from sexuality. Plenty of straight guys are feminine, after all, and plenty of gay guys are masculine.

Take the commenter who says his boyfriend seems “straight AF” at first blush: “His roommates regularly give him sh*t by insisting he’s only pretending to be gay to f*ck with all of them, but then they see me over and hear our (unintentionally) loud sex, and they [get] the picture. And man, if they even knew HALF of the amount of butt stuff he is into, they wouldn’t be having those doubts.”

Update: One Queerty reader emailed us to point out this Redditor may be living with sexual orientation OCD, a condition we reported on in 2017. The OCD Center of Los Angeles website asserts that gay people can be compulsively concerned they’re actually straight:

Over the years, therapists here at OCD Center of Los Angeles have treated many homosexuals (male and female) who are plagued by obsessive fears of being “straight”, and who suffer equally when OCD attacks their sexual identity. Furthermore, the fears that clients with this condition report have little to do with actually becoming gay (or straight). At its core, Sexual Orientation OCD is the fear of not knowing for sure, paired with the fear of never being able to have a healthy, loving relationship with a partner to whom one feels genuinely attracted.