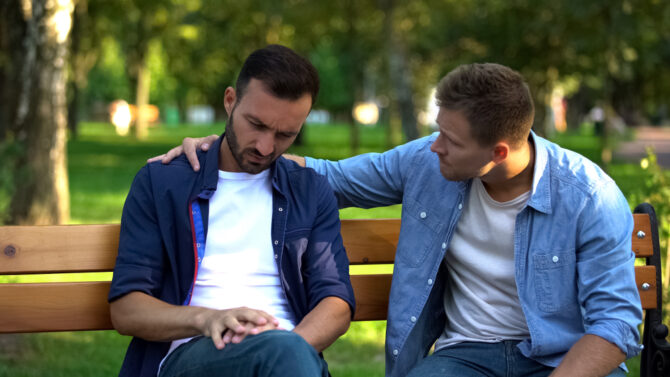 Redditors console gay man harassed about PDA with “kids around”

Some loudmouthed woman ruined a perfectly lovely day in the park for one guy and his boyfriend, and now the guy is wondering if he’s overreacting to this “uncomfortable experience in public.”

“Then this lady in her late 40s/early 50s walks by us [and] wouldn’t stop staring and started to point at us,” the guy writes. “She then starts talking to an old man sitting in the park, starts yelling telling the man to ‘look at them’ and [saying] ‘THERE’S KIDS AROUND.’ Basically, very loudly shaming us.”

“I know nothing serious happened—she did not even talk to us directly—but, I don’t know, since then, I have just been having anxiety all day,” he adds.

And in the comments, the guy says he and his beau weren’t even kissing. “[I] just had my arm around him, and she decided to flip out,” he said. “I guess I have learned my lesson, lmao. No more parks.”

Other Reddit users were quick to sympathize with the guy.

“You are definitely not overreacting,” one wrote. “We feel what we feel. I think we would all feel what you did and have different thoughts/anxieties about what to do. Recently, I had supper with friends and a friend of one of my friends. When the woman realized I was gay, she went batsh*t crazy and said, ‘Why do you need to have parades? You are lowering yourself. If you want change, you should do it with your intellect and (get this) TED Talks.’ … It went downhill from there, and I let her have it. But there are other times when I didn’t say anything, even though I am steaming. Just remember it’s about them, not us.”

Another Reddit user said that he experienced similar PDA panic with his significant other while driving into San Francisco on the I-580. “I was massaging my spouse’s neck since it was sore from the long drive back from L.A., and a minivan slowly passed us. It was full of kids between 6 and 11, and they were all freaking out, screaming at their parents and pointing at the ‘gay people’. Massaging another man’s neck isn’t even necessarily gay, but what a commotion. You would think we were naked on a flatbed truck [and] having a 20-man orgy, by their reaction, but I guess we were the first ‘gay people’ those kids had ever seen in real life.”

Other commenters proposed possible comebacks for the hateful person in the park. “That’s not my fucking problem, Helen,” one person wrote. (Is Helen the new Karen? Aside from our devotion to certain Helens—Hunt and Mirren—we like it.)

Related: Gay couple accosted by homophobic cyclists for simply asking them not to trespass on their property

There were disagreements in the comment section, though. One person wrote that he would “start making out” with his man after hearing comments like Helen’s.

But another person begged to differ. “People who often say f*ck you to others invite getting f*cked over themselves,” that person wrote. “Live and let live.”

And commenters disagreed with that disagreement. “Kissing is nothing harmful to that bitter old woman,” one person replied. “The solution is not always to shrink away. At some point, resistance may be necessary.”

Elsewhere on the thread, someone said he “never dared express affection in a park” because of people like Helen.

But another commenter said, “You should do the opposite, and be extremely visible in public spaces. It’s an act of service. For some gay kids, it may be their only sighting of someone who is like them. They need to see it.”

Which leads us to one of life’s most enduring questions: Are the straights OK?

While we ponder that, let’s just hope this romantic park-goer and his boyfriend avoid further entanglements with late-40s/early-50s homophobes.