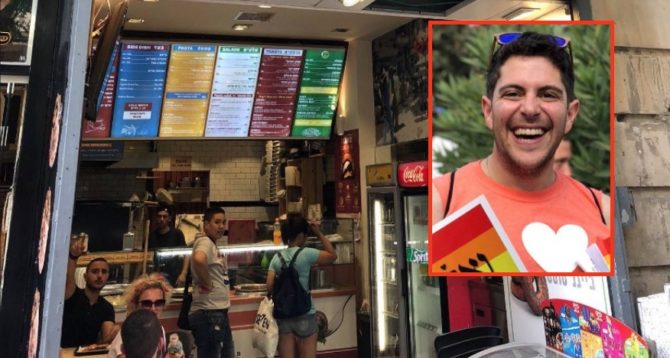 An American rabbinical student is suing a Jerusalem pizzeria for denying him service based on his sexual orientation.

Sammy Katner, who is studying at the Reform movement’s Hebrew Union College in Israel, entered the pizza shop wearing a gay pride T-shirt, one day after the Jerusalem Pride March.

Katner says the man behind the counter saw the shirt, asked if Katner was gay, and was promptly told him to get out.

He shared the story, along with his disbelief, on Facebook:

“Today, for the first time in my life, I was denied service at a pizza store for being who I am (in Jerusalem). I walked in with the shirt below, and the guy behind the counter said ‘Atah Homo (are you gay)?’ I said yes. He said ‘out’ and pointed at the door. My jaw dropped, and he instructed my classmates and I to leave.”

Today, for the first time in my life, I was denied service at a pizza store for being who I am (in Jerusalem). I walked…

It is illegal for businesses to refuse service based on sexual orientation in Israel.

Katner’s lawsuit seeks damages of about $9,100.

“This is an important precedent for Jerusalem,” Rabbi Noa Sattath, the director of the Israel Religious Action Center, said.

The shop owner first told Israeli media that he would fire the employee if the story turned out to be true, but later walked back the comment and said he believed it was a misunderstanding — the employee was probably trying to close the shop ahead of the start of Shabbat.

See what he did there?

Sattah has also said any money he gets from the suit will be donated to local groups that support the advancement of LGBTQ causes.

The case is scheduled for January 31.