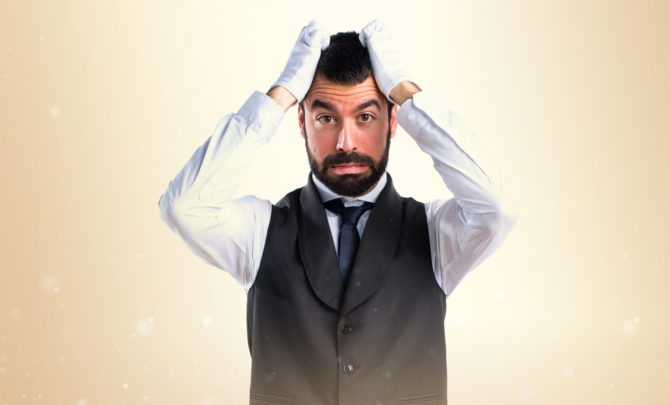 A gay server has taken his story of discrimination online after encountering a straight couple who demanded a new server after being seated in his section.

The reason? They wanted someone who wasn’t so “flamboyant.”

Redditor PhiPhiAokigahara posted about the infuriating experience, which became an even bigger insult after he reported it to management.

In the post, titled “We demand a new server, we don’t want this flamboyant gay one,” he writes:

“I serve at a well-known chain Italian restaurant and was making my rounds in my section tonight. That included greeting two older white people.

“I pleasantly collected their drink order and let them know they can take their time with the menus and to let me know when they’re ready.

“I’m in the kitchen talking to a co-worker when the host comes through.

“‘Phiphi do you have 32?’ ‘Yeah, why?’ ‘Well.. they want a new server.. uhh its because you’re? gay’ Cue my freak-out. Apparently the moment I left the table the husband stormed to the host stand and loudly demanded a non flamboyantly gay server because “he’s a man of God and can’t be around that.”

Phiphi reported the unacceptable behavior to his manager. That’s when the night got even worse.

I told my manager immediately in hopes that this guest would be removed. Did that happen? Nope. My manager initially gave them a stern talking to but I guess they were so polite in response my manager saw fit to not only give them full service but leave them in my section in plain sight of me despite my protests.

Luckily, not all the diners in Phiphi’s section were of such strong “moral” character.

“I was fortunate to have a regular in my section to watch the whole thing and her grandson (2) gave me a hug with so much enthusiasm while she glared down the homophobes.”

Still, Phiphi “spent the next hour in the back mostly in shock.”

“Safe to say it ruined my night,” he added.

That same regular called to complain to the unnamed chain restaurant.

Assuredly sensing lawsuit territory, Phiphi got a phone call the next day:

“I woke up today to a phone call from my boss. My regular called my manager, my general manager AND the district manager to tell them how absolutely infuriated she was over it. I got to listen to the manager who allowed their stay to apologise over and over again. It felt great to hear him so panicked over it all.

Next time the guests will be removed immediately when they make prejudiced remarks (like they should have been from the beginning!) But seriously, who does this?!”