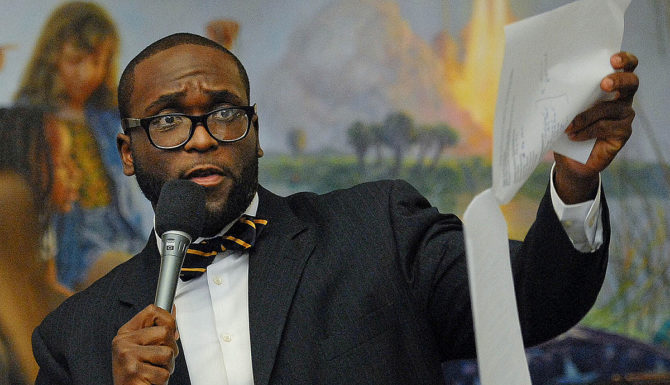 This just in: Florida state Rep. Shevrin Jones is G-A-Y gay! He’s proud of that fact. And he couldn’t care less what anyone has to say about it.

The 34-year-old Democrat just came out in a new interview with the Miami Herald. Jones explains that he came out to his family about five years ago. He and his wife, who he still loves dearly, divorced in 2015 and he spent the next few years doing some quiet soul searching.

“She and I were friends for 10 years at school,” he explains. “When I married her, I loved her then. But I loved her too much to continue to lie to her and lie to my family.”

Last September, Jones’s older brother died unexpectedly, which sparked him to reflect on his life even more deeply.

“I was like, that could have been me,” Jones says. “I could drop dead living behind the scenes of something that could have helped someone else. I started living my truth just a little bit more.”

Though Jones is out to his family, friends, and close colleagues, it wasn’t until he saw the recent wave of LGBTQ politicians running for public office that he felt ready to speak publicly about his own sexuality.

A few weeks ago, Jones asked former state Rep. Joe Saunders, who now serves as the political director at Equality Florida, to add his name to its official roster of endorsements of openly gay politicians.

Jones, who was first elected in 2012, says he doesn’t know how being out might impact his chances at re-election, but he’s also not worried about it.

“Mark my words: Now that I’m living my truth, if I am never elected again, I’m OK with that,” he tells the Herald.

He continues, “Because there are so many people right now who are in office, in places of high stature, who are not living truthful lives and they sleep with that lie on a daily basis. If me living my truth is a reason to vote against me or vote me out, then I’m OK with that.”

So often, people live their life behind a curtain, leaving so many guessing what’s behind it, or even leaving it to them to make their own assumption – I got tired of living behind that curtain, and it was time to open up and tell my story. https://t.co/FOBvlBZ4xV