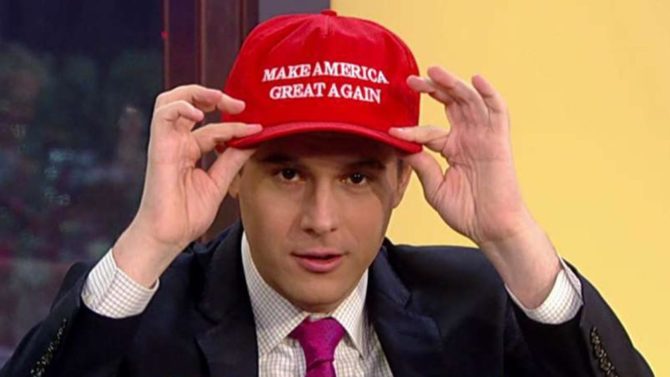 Openly gay FOX News contributor Guy Benson is back with an uninspiring new video produced by Prager University for–well–we’re not sure who the intended audience is supposed to be. Definitely not LGBTQ people. Though straight people probably aren’t going to give a shit either.

In the video, which was released earlier this week, 32-year-old Benson defends his identity as “a Christian, a patriotic American, and a free market shrink-the-government conservative who also happens to be gay.”

“When it comes to my political beliefs, my orientation is only one part of the story,” Benson says. “It’s not the totality of who I am.”

Related: Fox News Contributor Guy Benson Comes Out Of The Closet, Inspires Nobody

He continues: “Some unimaginative leftists like to believe this qualifies me as a self-hating gay person. This is so boring!”

Benson goes on to say that everyone is way too obsessed with things like gender, race, and sexual orientation, all of which have nothing to do with their ideas or values. And that’s boring!

Related: Out Fox News Commentator Thinks Gays Should Ease Up On People Against Marriage Equality

“To be candid, in my day-to-day life and work, I spend a lot more time thinking and writing about the failures of Obamacare, for example, than I do about ‘LGBT issues,’ whatever that term might mean on any given day,” he says.