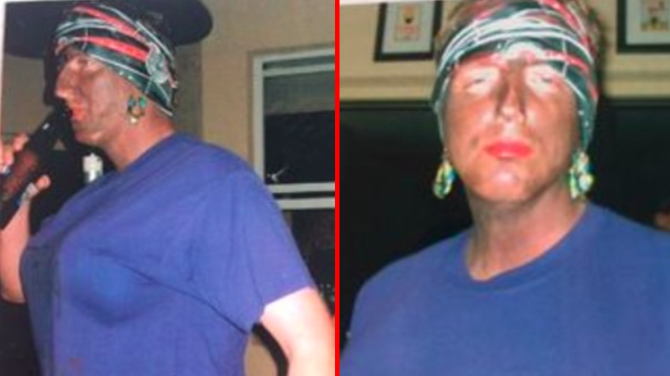 Less than two weeks after being appointed by Gov. Ron DeSantis, Florida’s Republican Secretary of State Michael Ertel has resigned after being exposed as a bigot.

Photos emerged online this week of Ertel dressed in drag and posing as a Hurricane Katrina victim. The photos were reportedly taken at a Halloween party 14 years ago, just two months after 1,800 people died in the devastating storm.

In the photos, Ethel is seen dressed in blackface and red lipstick, wearing earrings and a New Orleans Saints bandanna, fake boobs, and a purple T-shirt that says “Katrina Victim”.

Two hours after they were published by the Tallahassee Democrat, the governor’s office confirmed Ertel had resigned.

Gov. DeSantis called the photos “unfortunate”, adding that Ertel has “done a lot of good work.”

“I don’t want to get mired into kind of side controversies, and so I felt it was best to just accept the resignation and move on,” he said, adding that he believes Ertel regrets what he did, “but at the same time I want people to be able to lead and not have these things swirling around them.”

The statement is ironic coming from DeSantis, a bigot who ran a racist campaign against Andrew Gillum last November that included no shortage of dog whistles, like telling voters not “monkey this up” by electing his black opponent and accepting campaign donations from a man who called President Obama a “n*gger Muslim”.

Asked for comment on the vile photos, all Ethel could say was, “There’s nothing I can say.”

In his resignation letter, 49-year-old Ethel wrote, “I am submitting my resignation as Florida secretary of state effective immediately. It has been an honor to serve you and the voters of Florida.”