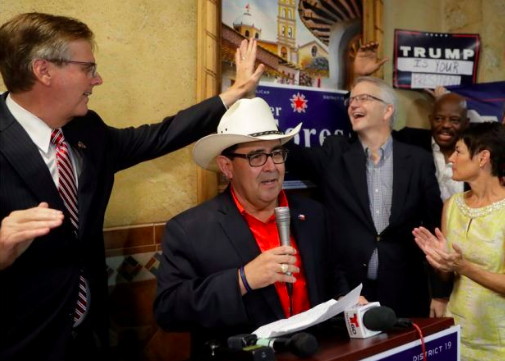 In 2003’s landmark Lawrence vs. Texas case, the U.S. Supreme Court struck down Texas’s sodomy law and, by extension, invalidated sodomy laws in 13 other states, making same-sex sexual activity legal across the nation.

But apparently Texas Republicans still haven’t gotten the memo, because the state continues to uphold a law that lists gay sex as a Class C misdemeanor punishable with a $500 fine.

The law, which has been declared unconstitutional for 15 years now, states:

(a) A person commits an offense if he engages in deviate sexual intercourse with another individual of the same sex. (b) An offense under this section is a Class C misdemeanor.

Texas Democratic state lawmakers have been fighting to remove it from the books for over a decade, but Republicans insist on keeping it there for symbolic purposes.

Texas Democrats have proposed bills attempting to repeal the statute in every legislative session since the Supreme Court declared it unconstitutional in its 2003 Lawrence v. Texas ruling.

But with Republicans holding a strong majority in the Legislature–21-10 in the Senate and 94-56 in the House–none of the bills have made it out of committee; they all died without being put to a vote.

Democratic state Rep. Joe Moody and Democratic state Sen. José R. Rodríguez have both proposed bills to repeal it in 2019, but so far Republicans have shown no signs of cooperating with the effort.

“It boggles my mind,” Moody, who introduced similar legislation in both 2015 and 2017, tells Courthouse News. “This isn’t making a statement about how you feel about the LGBTQ community. … This is simply cleaning up a criminal statute that is unconstitutional.”

Meanwhile, attorney Paul Castillo from Lambda Legal says the law is still being used by some law enforcement officials to target gay men.

“In the years since Lawrence, there have been numerous incidents in Texas and across the country where officials have used these illegal bans to justify harassing, detaining or illegally arresting individuals,” Castillo tells Courthouse News.

He adds, “Unenforceable laws are far from harmless; their mere presence causes confusion for law enforcement and, more importantly, ongoing stigma for the community.”

Moody says he’s determined to do away with the homophobic statute, no matter how long it takes.

“I will propose it until this unconstitutional law is taken off the books,” he says.