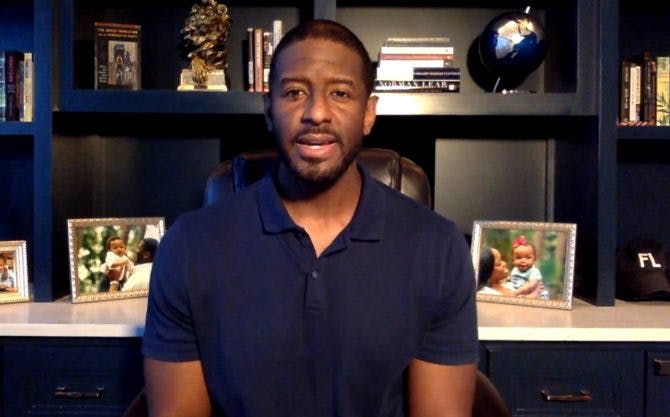 Numerous studies have found that bisexuals feel more pressure to conceal their identities than gay and lesbian people because of the negative responses they often receive for coming out. Sadly, one only needs to look as far as Andrew Gillum to see why those fears are justified.

The former Florida Democratic gubernatorial candidate came out as bisexual in an interview with Tamron Hall this week. It was Gillum’s first time speaking publicly since checking into rehab after being found by police in a Miami hotel room with a male escort who appeared to have OD’ed on crystal meth.

While many have applauded him for owning up to his mistakes, taking control of his health, and speaking his truth, many others, including some from the LGBTQ community, have decided instead to continue kicking him while he’s down by lodging vicious personal attacks against him and his family.

The attacks have been brutal…

Would #AndrewGillum have ever come out as bisexual if he hadn’t been caught naked in a drug den with two other men?

Andrew Gillum is simply gay. All that "bisexual" talk and his wife and kids are just a cover. He is a downlow brother. Dangerous

Andrew Gillum deserves no praise for "coming out." His being bisexual does not forgive the escorts and the drugs.

If Andrew Gillum cheated on his wife with a white woman he’d be canceled but since he cheated with white male prostitutes on meth he’s being praised as an LGBT hero ? Bye!

"Andrew Gillum is a faggot bitch for cheating on his wife

??? you can’t make this up #andrewgillum #gayagenda

Andrew Gillum smoked meth and blamed it on being Bisexual

LOL to the Democrats trying to salvage @AndrewGillum under the cloak of “brave bi-sexuality”.

I broke this story, & his sexuality was of no interest to me. The crystal meth, cheating on your wife with an escort, while calling Trump & his supporters immoral? —that was the hook.

Attacks lodged against Gillum’s wife have been equally as mean…

Andrew Gillum wife says she ok w/ him being bisexual? ?

Andrew Gillum is NASTY! His wife is a Fool.. what about the kids? And she might wanna get an STD test except he probably does not sleep with her anymore because hes actually gay.

Andrew Gillum’s wife is just trying to help him get another job. He would’ve been better off going the Cory Booker route. (For some reason I never saw Cory Booker as gay, by the way.)

The spin on Andrew Gillum cheating on his wife is masterful. All the pictures for the articles got his wife sitting right there like she ain't get cheated on.

I have some comments on the Andrew Gillum situation. For one, his wife is in shambles. She ain’t fooling me. Not because he is bisexual but because he was cheating and having secret drug dates. She’ll leave soon.

How much did they pay Andrew Gillum’s wife to be a professional beard???

So Andrew Gillum wife is okay with him being caught in a hotel, naked with strangers, doing drugs passed out?! Forget his sexuality, what about the infidelity and illicit drug use? ?

This doesn’t seem genuine to me.

It’s important to note that Gillum (unlike for instance Aaron Schock who consistently voted against LGBTQ rights while he was a closeted member of Congress) has always been a staunch and vocal supporter of marriage equality and the LGBTQ community.

In the interview, you could see how much the couple loves each other, how much they are on the same page, and ready to move forward in their lives with honesty, poise, and grace.

David J. Johns over at The Grio adds:

Let’s celebrate Andrew and R. Jai Gillum for finding the freedom to define themselves and their relationship on their terms and for making space for others to do the same. Let’s celebrate the culture shift that holds space for Black LGBTQ/SGL people to thrive—as we are—without having to shrink or hide critically important parts of themselves.

White supremacy wins when Black people are not able to show up in the fullness of who we are. As so many of us are actively engaged in disrupting White supremacy and anti-Blackness, let’s all commit to protecting and giving grace to one another.

As someone who identifies as bisexual (but doesn't talk about it much), I'm just going to say that it absolutely still matters to have a prominent politician– let alone one in recovery– come out like this.

Related: A Heartbreaking Look At Why So Many Bisexual Men Remain Closeted