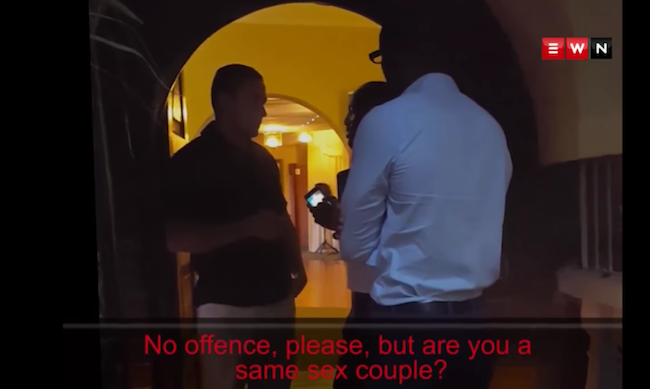 You just can’t buy that kind of negative publicity.

Earlier this week, staffers at a restaurant near Johannesburg, South Africa were caught denying two journalists a table at the establishment during “date night,” unaware that the men were posing as a gay couple.

Not that this should come as much of a surprise to anyone familiar with the place. A text from the establishment, sent out after potential customers make a reservation for “date night,” clearly states that same-sex couples aren’t welcome.

After Eyewitness News journalists Clement Manyathela and Victor Magwedze were turned away, the owner of the restaurant told News24 “the reason for stating ‘no same-sex couple’ is not meant to discriminate against anyone, but to control a couple’s event.”

The South African Human Rights Commission (SAHRC) is investigating the incident, with spokesperson Gushwell Brooks emphasized that the Constitution’s equality clause makes it clear that discrimination based on sexual orientation is not acceptable.

“There are numerous establishments that still refuse entry or services to people based on their sexual orientation and that this is obviously in breach of our right to equality,” he says.