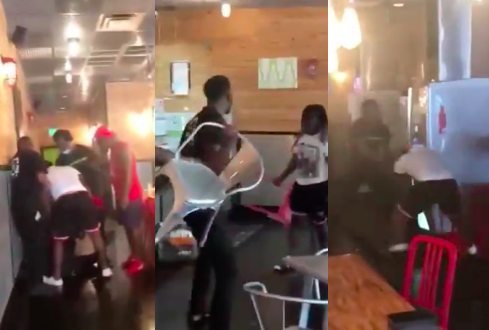 A gay restaurant worker from Miami says he was harassed by a group of homophobic customers, called antigay slurs, knocked to the ground, beaten, chased, and then fired from his job.

The alleged incident happened last Sunday, June 28. Jaquan Walker was working at a Miami Beach BurgerFi when he got into an argument with a group of customers who made fun of his voice.

Disturbing video shows several punches being thrown, kicks, a chair being hurled across the restaurant, and multiple antigay slurs being shouted at 24-year-old Walker, who was working behind the cash register.

Strong language here, but this is the video of a BurgerFi employee who was attacked, beaten and showered with anti-gay slurs before he throws a chair at one of his attackers in anger. He was fired and spoke exclusively with @wsvn pic.twitter.com/BbX72TIuxm

Speaking to WSVN-TV, Walker explained that he was taking the group’s order when one of the men said his voice sounded gay.

“They tell me that I need to put bass in my voice,” Walker said. “They was saying ‘f*ggot.’”

When Walker stood up for himself, things turned violent.

The men grabbed him, pushed him to the ground, then kicked and punched him while shouting antigay slurs. As they were walking away, Walker says he was “so mad” and “embarrassed” that he threw a chair in their direction.

That’s when they turned around and beat him again before chasing him towards the back of the restaurant.

“I had scars on my neck. My arm was bruised. I still have pain on the side of my ribs, and I have cuts inside my mouth from them kicking me in my mouth and things.”

To add insult to injury, when Walker returned to work the next day, his boss told him he no longer had a job there.

“It makes me feel bad,” he said. “I come to work. I work. I mind my business. I don’t mess with nobody. I was a good worker. I was always there on time. It’s scary because you never know how far it can go.”

Walker says he’s looking for another job, but he has been having difficulty because of record high unemployment numbers and the coronavirus pandemic, which is currently raging out of control in Florida.

Miami Beach Police say they are looking for two men in connection to the beating. The police report describes the incident as an “anti-gay battery.”

Related: This Miami gay man kissed his date goodnight. Then the pair got shot.