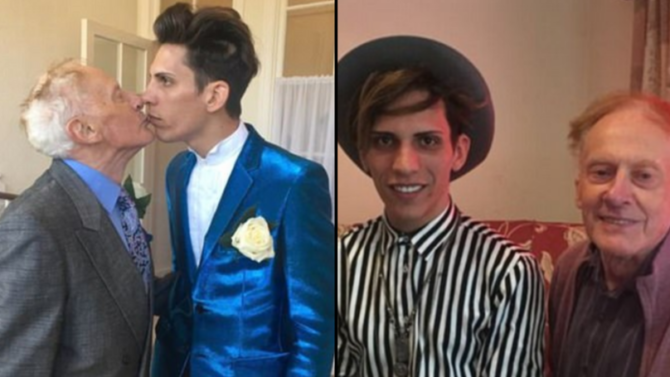 Back in 2017, the world (or at least the subset of the world that values important matters like these) met Philip Clements, the then-78-year-old former priest who popped the question to his 24-year-old boyfriend, Florin Marin.

As is the case in any relationship, the road ahead had twists and turns and a pothole here and there.

Clements said Marin was controlling, and wouldn’t let him go clubbing with his friends. They split up five months after their engagement.

But in the latest media update, it appears the couple is giving it another go.

Speaking to The Sun, Clements said:

“Sometimes we have a little row but underlying it all, I have a deep affection for him.

I love him to bits. If we were permanently separated, I would be the most unhappy person in the world.”

What’s different this time around? They’re now in an open relationship:

I would be a little bit jealous I have to admit. That other chap, who doesn’t exist at the moment, is getting more of what I should be enjoying.”

It sounds like they still have some processing to do around their ground rules, but hey, it’s a start.

Here’s Marin’s take on where they’re at:

“Sometimes he doesn’t understand the culture – he’s English, I’m Romanian, I have my manners, he has his manners. We don’t think the same,’ he said.

But we do have a very, very intimate and close relationship. At one time, he used to shove me out of the way in the bed.

He doesn’t mind me cuddling up to him and enjoying all that tactileness.”

And who said chivalry was dead?