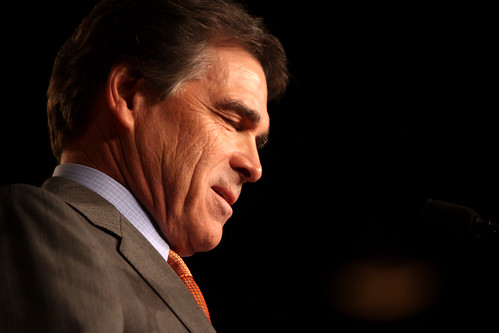 In the bizarro universe of the Republican right-wing, being against hate only proves that you are a socialist at heart. This was one of the big liabilities that New Jersey Gov. Chris Christie would have faced if he had chosen to run for president. And it turns out to be one of the newer headaches that Rick Perry (aka Gov. Goodhair) faces in his quest to be the GOP presidential nominee.

A decade ago Perry signed a Texas hate crimes bill that includes attacks motivated by the perceived orientation of the victim. In the preceding decade, the ’90s, when George W. Bush was the lone star state’s governor, there had been at least 28 documented murders of gay men, motivated at least partly by animus. It was literally a serial killing with multiple perpetrators, and the circumstances of almost every murder were eerily and gruesomely similar.

The bill was also motivated by the horrific murder of James Byrd, a black man who was dragged to death by three white men in Jasper, TX. Perry, then newly-elected to office, hedged his bets in signing the the bill. Perry never mentioned sexual orientation at the time he signed the measure into law, and his statement was a pretty broad hint of where his discomfort was. “I have expressed reservations about passing a hate crimes law which delineates particular groups of Texans,” he said at the time.  “But I also believe that as the Governor – and as a Texan – I have an obligation to see issues from another person’s perspective, to try to walk in another person’s shoes.”

Apparently, the religious right believes the only shoes that count are theirs (and boy, are they ugly). Gary Glenn, executive director of the Michigan chapter of the American Family Association, compared Perry to Obama. If Perry wins the nomination, Glenn asserts, “both major presidential candidates would be on record as having signed into law what is arguably the most dangerous element of homosexual activists’ political agenda, which we routinely characterize — when criticizing Obama and other Democrats who advocate it — as threatening to result in the criminalization of Christianity.” (Why do we think that Glenn believes that every part of the gay agenda is its most dangerous element? And isn’t it a little odd to talk about the bill’s supposed “danger” posed to right-wing ideology when even Rick Perry realized that the real issue is gay men–not to mention members of other minority groups– being hacked to death?)

Other ultra-conservative types have piled on, including Steve Baldwin, a commentator on World Net Daily, who cites the hate crimes law as one of 10 questions Rick Perry must answer. Actually, Baldwin and company aren’t expecting an answer. They already know what they think. “[U]nder hate-crimes law, if someone beats up a white person and then beats up a gay person, they receive a heavier sentence for the latter crime,” Baldwin writes. This makes a travesty of the concept of equal application of the law and is likely unconstitutional.”

Baldwin doesn’t explain why the law is still in effect if it’s so plainly unconstitutional. Perhaps it has something to do with challenges to hate crimes laws largely failing in court.

The irony is that Perry could use some help to bolster his civil rights bona fides now, in the wake of the revelation that he used to lease a property that advertised its racially offensive name on a rock at the entrance. But the Republican base seems to believe that the only hatred that exists is against white people and Christians. And the fact that the hate crimes law that Perry signed is now classified as a gift to the gay community, with a big pink ribbon on it, makes it impossible for him to trumpet one of the few positive civil rights gestures he made as governor.

Instead, Perry now has one more nail in his political coffin, hammered in place by the right-wing of a party that seems determined to find the purest candidate and not the most electable one.