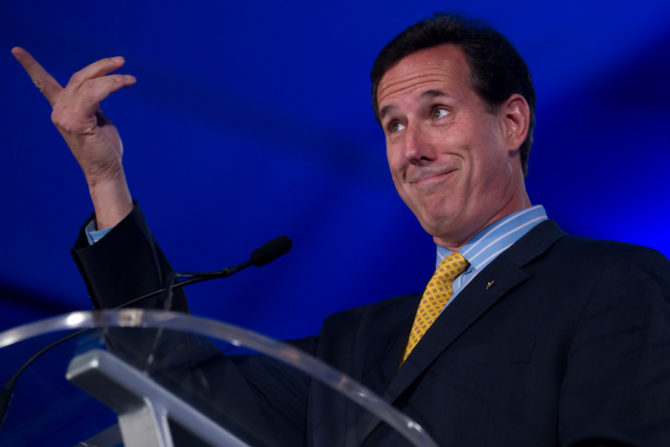 Twice-failed-presidential-candidate-turned-CNN-commentator Rick Santorum was trending all day yesterday after video of him making racist remarks about Native Americans hit the internet.

The video was taken during a speech Santorum gave last Friday at a  Young America’s Foundation conference, during which he proudly stated that the culture of the United States was birthed by “Judeo-Christian” values.

Related: Rick Santorum tries to suggest Trump isn’t racist, gets his a** handed to him on live TV

And just like that, everyone was reminded of the nearly 20-year-old feud between the two men, which began back in 2003 when Savage held a content asking people to come up with a definition for the word “santorum” in response to the then-U.S. senator’s extreme antigay views.

In 2011, Santorum discussed the issue, telling Raw Story, “There are foul people out there who do horrible things. It’s unfortunate some people thought it would be a big joke to make fun of my name.”

Rick Santorum is trending, and once upon a time, rightfully, if you googled "santorum', my fellow old folks will remember what the first thing to come up was ("a frothy mix of…..")

High media knowledge is knowing exactly why Dan Savage is trending without having to click on the link pic.twitter.com/XXTg7BjPch

It’s an insult to frothy lube & fecal matter to be equated with Rick Santorum.

Rick Santorum is a frothy mix of misinformation and nativist hate.

He’s a frothy mix of bigotry and bullshit.

Frothy mixes of lube and fecal matter should sue Rick Santorum for damaging their good name.

Rick Santorum does not deserve a retort to his bullshit nonsense.
Instead, smile at remembering how a campaign by Dan Savage made his last name an infamous Google search.

Since video of Santorum’s racist remarks surfaced, people have been calling on CNN to drop him from its roster.

“Rick Santorum is an unhinged and embarrassing racist who disgraces CNN and any other media company that provides him a platform,” Fawn Sharp, president of the National Congress of American Indians, said in a statement. “Televising someone with his views on Native American genocide is fundamentally no different than putting an outright Nazi on television to justify the Holocaust.”

Sharp then offered CNN an ultimatum: Fire Santorum or face a potential boycott from more than 500 tribal nations and all of their allies worldwide.