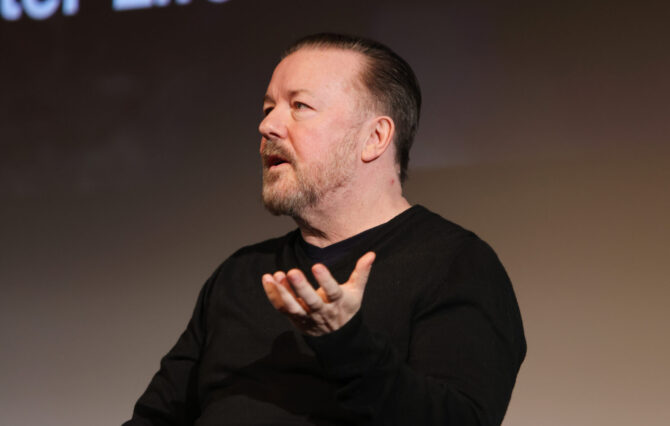 Ricky Gervais is on the defensive after mocking trans women in his edge-lord stand-up special SuperNature, referring to them as “the new women” and “the ones with beards and c*cks.” He went on to joke about a hypothetical trans woman raping cis women.

Last year was the most lethal year on record for trans people, with the HRC reporting some 57 violent killings of trans and gender non-conforming people. Rhetoric like Gervais’ that reduces trans women to sexually violent caricatures based solely around their genitals contributes to the culture that leads to these violent killings, but on a recent interview on The One Show with Alex Jones, Gervais asserted that his dangerous rhetoric was all just comedy.

“That’s when I say something I don’t really mean, for comic effect. And you as an audience laugh at the wrong thing, because you know what the wrong thing is. It’s a way of satirizing attitudes.”

A quick scroll through Twitter shows you that, in fact, his audience does not know what the wrong thing is.

Meanwhile, people with a real handle on trans issues and the violence they face had plenty to say:

Fuck you @netflix, SO glad I cancelled my subscription to your hate service months ago

You’re gonna get more of us killed

Trans ppl get it every single day in the UK press. My trans daughter just wants a break. Doesn’t want to be the centre of attention. Just wants to be left alone. She feels worthless enough as it is without being the butt of the joke. A trans rape joke? Really Ricky?

ricky gervais being utterly predictable and mocking transgender people in his latest special. it’s fucking insane to me how we take some of the most vulnerable, marginalised people in society… and tear them apart to hundreds of millions on netflix like that’s okay

When an ‘edgy’ comedian (mining the 1970s), and Pamela from Surbiton overlap, its probably not comedy, it’s definitely not edgy.

Ricky Gervais got comfortable inducing groans, learned to do it like a trick, got famous and wealthy from it. Eventually he saw the groans as the point, and in enlightened circles, the way to induce groans is to disdain enlightenment and be a bigoted piece of shit.

Between platforming Ricky Gervais and Dave Chappelle, it’s clear that Netflix is trying to prop up its falling business by wield transphobia to garner viewer gaining controversy, then using shows like Heartstoppers to shield itself from queer criticism. Well screw you Netflix.

i know it’s been way overshared by this point but it is pretty damning that James Acaster shut down Ricky Gervais’ whole routine in about 3 minutes and now 5 years later Ricky is just, still doing it

Ricky Gervais stopped eating meat because he cares about animal rights. He hasn’t given up eating shit in his standup specials tho cuz he’s an asshole who doesn’t care about trans lives.

the same day ricky gervais released an anti-trans comedy special, a sitting US senator falsely attributed a mass shooting to a trans person

I respect Ricky Gervais’s right to identify as a comedian, but he has to meet me half way and tell a joke now and then, that’s all I’m saying.

Members of the queer community had hoped following the debacle with Dave Chappelle’s transphobic special The Closer and the subsequent employee walkout at Netflix that the streaming giant would stop platforming violent rhetoric, but that hope seems to be wearing thin.