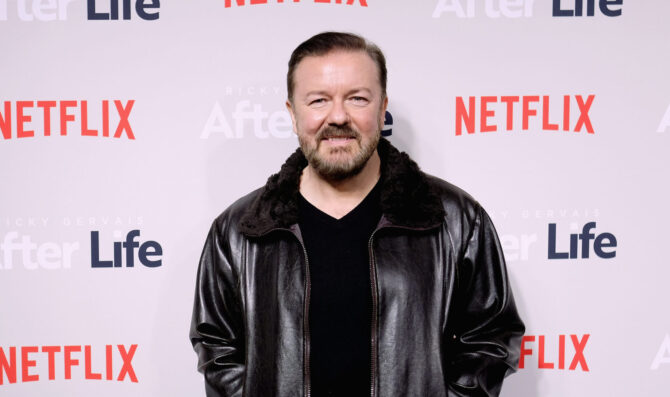 Netflix decided to give Dave Chappelle a break this week by giving trans people a different aggressive funnyman to endure (though Chappelle is doing his best to keep focus). Ricky Gervais’ new stand-up special SuperNature wastes no time in getting to calling trans women “the new women” and more specifically “the ones with beards and c*cks.”

Following the wildfire notoriety of Chappelle’s transphobic special The Closer, it seems both Netflix and Gervais were desperate enough for engagement to go for the target that’s been proven to cause controversy.

Netflix allegedly ordered the SuperNature special for some $20,000,000, which seems like quite a bit for the streaming giant to shell out for Gervais’ repetitive jokes. This latest release comes in the face of a steadily declining user base for the streaming giant and a mass of layoffs that impacted a lot of the queer creatives who had worked for Netflix, and it’s hard to imagine too much queer goodwill is still left for the company.

Gervais ended his transphobic segment with a pretty cognitively dissonant statement: “In real life, I support trans rights. I support all human rights. Trans rights are human rights. Live your best life. Use your preferred pronouns. Be the gender that you feel you are. But meet me halfway, ladies. Lose the c*ck.”

It’s hard to imagine that Gervais in any way believes any of those first few statements based on the last one.

Some people will undoubtedly rehash the argument that it’s all just jokes, anyone is free game, and that the right to ridicule minority groups is simply the practice of free speech. Arguments disproving these statements have been explained over and over for years, so rather than write up yet another essay, we’ll leave it to some real comedians to rebut. Here are James Acaster and George Carlin on comics who insist on punching down:

just gonna go ahead and repost this bit about edgy comedians from James Acaster pic.twitter.com/SKSWI1buCI

Queerty has reached out to Netflix for comment and will update this story with further developments.