Ricky Martin, who turns 50 on Christmas Eve, gave his followers the best start to the week: posting a photo of himself in the bath.

To the disappointment of some, he’s not actually naked but wearing swimming trunks. The photo comes from a new promo video shoot. In his Instagram stories, he revealed the project is being overseen by Costa Rican photographer Daniela Vesco.

Vesco posted to her own stories the same image, saying, “Excited for my debut as director for this amazing music video with my absolute favorite @ricky_martin ❤️ Thank you Ricky! ❤️❤️” 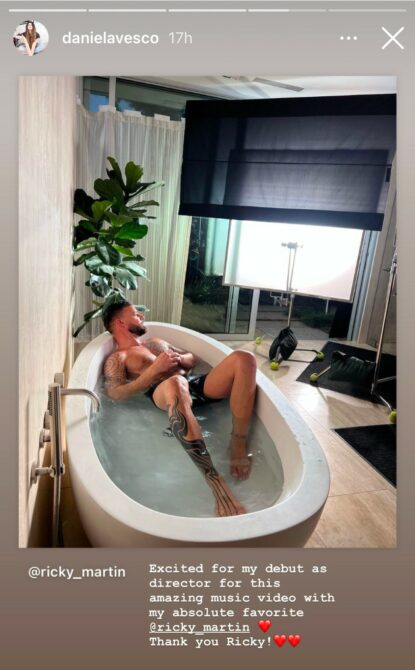 Related: Ricky Martin lost followers after posting these photos and has something to say about it

Martin’s image has now racked up nearly half a million likes, significantly more than most of his Instagram posts. There’s no word yet on what song the video is for, but we already can’t wait to see it.

Among those to comment was Martin’s husband, Jwan Yosef, who simply said, “Oh HELLO 😍”

The men tied the knot in 2017 and are fathers to four children.

Related: Ricky Martin has something very big to show you