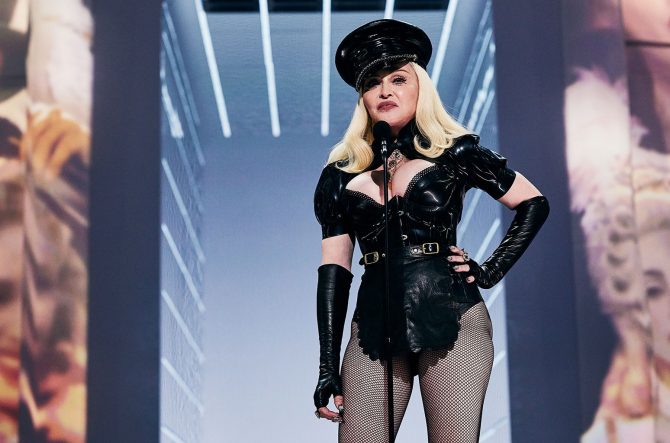 Madonna is being championed by anti-vaxxers on the right after she was asked by playwright Jeremy O. Harris in a recent interview for V Magazine about where peace exists in a world affected by a pandemic.

“It’s interesting because peace is subjective,” the singer said. “The way people think about the pandemic, for instance, that the vaccination is the only answer, or the polarization of thinking, you’re either on this side or the other. There’s no debate, there’s no discussion.”

It didn’t take long for right-wing media outlets to latch onto those words.

Absolute Queen! We need more public figures speaking out against this culture of paranoid conformism.

Madonna: “The way people think about the pandemic, for instance, that the vaccination is the only answer or the polarization of thinking you're either on this side or the other. There's no debate, there's no discussion." Advocates for free speech ??? https://t.co/3peBowcYVr

First of all, if that is Madonna, I finally agree with her on something 👏

I don't think I have ever agreed with her b4 this…

Bravo @madonna for speaking out over the toxic Cancel Culture. Glad someone as iconic and big as her is waking up. Madonna says there's "no debate or discussion" over vaccines due to "cancel culture" https://t.co/g611J033io

Maybe now the lunatics on the left will listen since she said something that everyone with half an IQ point should see.

Interesting ?Madonna claims there is ‘no debate or discussion’ about vaccines because of ‘cancel culture’https://t.co/pyjY4CJPjN

Pop icon Madonna is speaking out against cancel culture.
In a recent interview with playwright Jeremy O. Harris for V Magazine, Madonna said that the censorship taking place these days is “frightening
I THOUGHT YOU WANTED TO BURN THE WHITE HOUSE..NEVER TOO LATE TO REDEEM YOURSELF

Unfortunately, this isn’t the first time the singer has made unhelpful comments about coronavirus. Last year, her Instagram account was flagged for posting vaccine misinformation.

According to the BBC, she shared a video that claimed a COVID vaccine had already been discovered but was being kept secret in order to “let the rich get richer”.

Then, of course, there was that infamous “great equalizer” bathtub video that briefly appeared on her Instagram page in March 2020 before being taken down.

Related: Madonna called Dave Chappelle “the next James Baldwin” in her new tour doc and fans are pissed