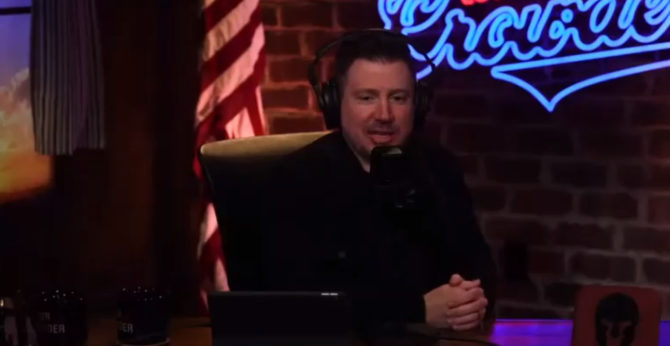 Following last week’s news that Marvel Comics will introduce a gay Captain America into story canon, a right-wing podcaster has quipped that the character will “succumb” to AIDS in the new storyline.

Commentator Dave Landau made the remarks while filling in as host of Louder with Crowder, a far-right podcast hosted by former Fox News contributor Steven Crowder. Landau apparently couldn’t wrap his head around the creation of Aaron Fischer, the aforementioned gay character that dons the mantle of Captain America.

After being widely condemned for racism, “Louder with Crowder” crew doubles down on bigotry.

“Marvel has reimagined Captain America to be a gay man,” Landau said. “Yeah, I guess — I don’t know if you’ve seen the picture of him, he does, he looks like a twink which I don’t get. Couldn’t he just be gay and look like Captain America always looks? Does he have to look like he sells ecstasy outside of a rave in the year 2001? Like he looks like he hacked up Angel Melendez and threw him in the river.”

Related: Newsmax wants to know why the gays get a Captain America and Trump doesn’t

Angel Melendez, for the uninformed, was a drug dealer and “club kid” murdered by fellow nightclub personality Michael Alig. The crime became something of a cause celebre in 1996.

Landau went on to claim that he had “obtained some exclusive new story details” about the introduction of Aaron Fisher. “Cap’s main conflict is not with the Nazis. No,” he said. “But instead he battles against complications arising from sharing his super serum needles.”

“Captain America brought AIDS into this office,” Landau went on. “Marvel is really playing catch up since DC actually did this first with AIDS Superman. Did you know that? Yeah. That’s a real ad in France to prevent AIDS. Because it’s not just kryptonite that affects Superman, it’s also three other, three letters that brought him to his final resting place. TLC.”

Landau’s Superman remark refers to an initiative by the French government to raise AIDS awareness. The campaign did feature Wonder Woman and Superman as HIV patients.

In the same broadcast, Landau also joked that transgender actor Elliot Page will auction off his breasts on eBay.

The announcement of a gay Captain America met with predictable right-wing attacks on Marvel Comics last week. In addition to Landau’s comments, far-right media site Newsmax complained that Marvel should also create a “conservative” Captain America who was also a die-hard Trump supporter.