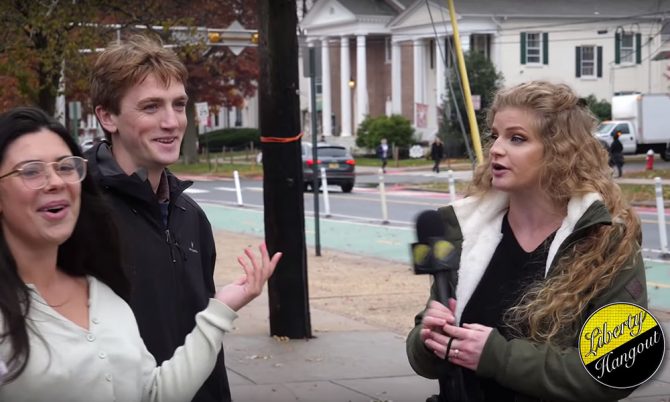 This is kinda cringeworthy. Not to mention totally stupid. And embarrassing.

After some heated back and forth about the hot topic of communism, Bennett questions Angela and James’ “communist collective ideology” by asking, “What are you resisting?”

Angela quickly apologizes for the insult. Then James chimes in: “I’m sorry you sh*t your pants at Kent State.”

To which Bennett responds by saying, “I’m sorry you were there sucking d*ck.”

Bennett then turns to the camera and says, “Actually, this guy was at a party at Kent State, he was giving out free blow jobs. He wanted nothing in return.”

“I guess I was,” James admits, proudly.

“Why were you giving out free blow jobs?” Bennett inquires.

“Communism,” Angela answers on his behalf.

The homophobic dig was shared to Liberty Hangout’s YouTube channel back in November, but it just recently went viral, and people on Twitter have a lot to say about it…

“i’m sorry you shit your pants at kent state” skfjsndndjdbdhd find me this king pic.twitter.com/FhSMexxREd

Speaking to PinkNews, Angela says, “I would have loved to debate doctrine and policies but it’s clear her aim was to paint a specific stereotype of the American left with leading questions.”

She adds that she wasn’t at all surprised by Bennett’s homophobic remarks about free blow jobs, “because we had seen her on the internet before and knew the scope of her views.”

“The deliberate choice to weaponize my friend’s sexuality or even use it as the source of a joke was offensive.”

Watch the full exchange below. Or don’t.