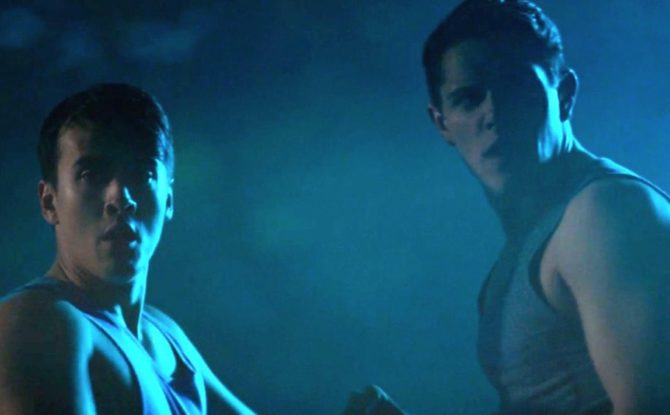 “Why can’t you use GrindEm like every other gay guy in the world?,” Betty (Lili Reinhart) asks Kevin (Casey Cott) in the latest episode of the CW teen drama Riverdale, deeply concerned about her friend’s safety.

More specifically, she’s worried that Kevin’s taste for cruising “Fox Forrest” for hookups will have dire consequences. After all, a killer is on the loose!

It’s a bold plot move for the series, now in its second season.

“Kevin has pent up a large amount of loneliness and he’s in a lot of every other character’s drama up until now,” Cott, 25, told Bustle about his plot in the episode. “He just needs to feel something and he’s trying to find someone in whatever way he can and that leads to this really risky, dangerous situation we find him in in this episode.”

So why can’t Kevin use “GrindEm,” the show’s not-so-subtle reference to Grindr?

Well, as he puts it: “Nobody is who they say they are online. At least in real life, what you see is what you get.”

OK fair point, though cruising for anonymous hookups in the woods comes with its own unique set of safety risks, even when a killer doesn’t happen to be on the loose.

Fans hoping for more gay stories in Riverdale can expect to see much more of Kevin in season 2.

“I think what’s cool about Kevin in season two is we kind of explore many different kinds of love interests, the same way that high schoolers do. Some are people you just meet, but are quick; sometimes you find a long-lasting relationship,” Cott told Teen Vogue. “We kind of delved into a few different kinds of relationships in Season 2. I think a bigger, more long-term relationship is coming for Kevin very soon.”

Related: So, the first steamy gay scene from C.W.’s “Riverdale” is here. Curious?

Public cruising seems a slightly odd throwback, though. What’s next — personal ads in the back pages of a local rag?