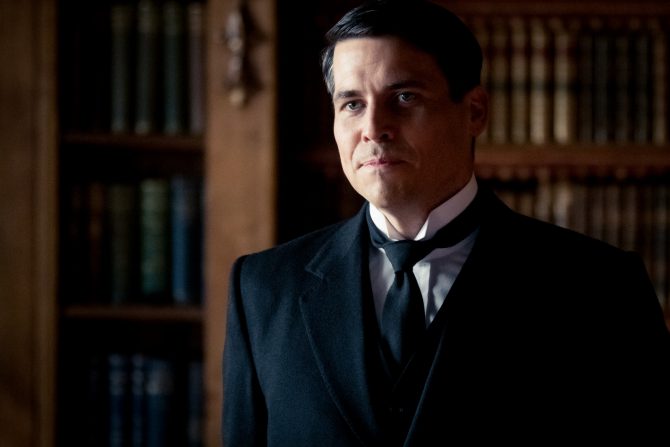 “It’s hard to believe our little show is now a cinematic event.”

Robert James-Collier sounds a bit dazed as he jumps on the phone, and with good reason: a little show that catapulted him to stardom is about to make the transition to the big screen. Downton Abbey: The Movie hits cinemas September 20.

The film sees James-Collier return to his signature role of Thomas Barrow, the scheming gay butler at the Downton house. The story picks up several years after the series finale when the King & Queen of Great Britain announce a special visit to the Abbey.

Needless to say, the residents there fly into a frenzy over the royal visit, which prompts several long-held secrets to bubble up into the public. For James-Collier, who began his career as a soap star and sex symbol on the UK drama Coronation Street, the film marks his most significant feature role to date.

A bit tired, but showing no loss of enthusiasm, James-Collier agreed to chat with Queerty about his return to the role of Thomas, being gay in the early 20th century, and his future as an actor.

When you come back to a character like this, what kind of preparation do you do? He’s at a different point in his life, not quite the schemer he once was.

The thing is, when you play a character for years, it’s like you build up muscle memory. A cerebral memory, of how to play him. It took years to find it. It’s very well ingrained in my mind’s eye. There was a break, but that was two and a half years. It wasn’t too long. As soon as I put the costume back on, the collars on and the suit, he just came back straight away. The posture came, the look in the eyes. It was quite easy to find him again. You’re right, in the sense that I think the TV series was more dramatic.

The film is very savvy in terms of its audience. We know that three generations watch this show. I’ve met fans where the grandmother, the mother and the daughter all watch the show together. So it appeals to fans from the age of 10 to the age of 80. But the film’s a lot lighter. It’s very funny, very comedic. But also, I think Tom Barrow’s storyline is a great counterpoint to that. It’s sort of a more authentic, edgy storyline if you will. It’s rooted in his sexuality. I’m glad that Julian [Fellows, the series creator and screenwriter] has chosen to tell the story because it shows how you dealt with being gay in a time when people referred to it as being ungodly. So I think it’s fascinating to play that, to see it, because as an audience, you begin to understand Thomas more. I’ve seen from Series 1 to the film people’s attitude toward Thomas change to understanding psychologically what he’s going through. That helps them develop empathy.

They root for him now, and they absolutely want him to be happy. It helps that we explain that psychological side very well. The audience perception of Thomas has changed, and it’s changed in the film. I think there’s a lot of heart to his story and a lot of hope. So I think audiences will enjoy his storyline.

What you say about the exploration of his sexuality, it is one of the most interesting plots in the film. It is something historical, and something that is hopeful. Now, did you have an input to what would happen to him this time out? Did you talk to Julian Fellows and make suggestions?

Julian’s got an Oscar, a Golden Globe and an Emmy. I’m not the actor to go knock on his door and say “I’ve been thinking…”

He’s a legend. Who am I to go and talk to him? And frankly, he’s always written such interesting stories for Thomas. He’s one of the most complex and complicated characters at Downton Abbey. He’s got many layers: he can be funny, he can be kind, he can be cruel, he can be emotional. He can be everything. And I think that’s why the audience enjoys watching him. And yes, the scheming is gone. And I do miss that side of him, but you have to remember, he’s the butler now. He got to the highest spot he can. He doesn’t need to scheme anymore.

Also, I think—this is rooted in his sexuality—he’s gotten more confidence in who he is. He’s confronted that and he’s sort of in a more stable place with his sexuality. In that, we find more of a calm and balance in Thomas than we’ve ever seen. He’s not as alienated and closed off. People know his sexuality at Downton Abbey, and they’ve responded, you know, with a very liberal response. Whether or not that’s to the time is for someone else to argue. What we can do is say the employees are certainly more understanding and more liberal than other houses were. Also, the colleague response to him has been very liberal. That’s part of his journey in the film: he finds this world, this subculture of homosexual men who are free and being themselves and dancing with each other and kissing openly. When you see the awe of wonderment on his face in that scene, it’s so heartwarming to go wow, there are multitudes of people like me out there, and they’re not ashamed.

To find that, it’s so heartwarming. There is hope for him. The sense of exploration for him that he’s explored this new world is beautiful to see. I was so happy for him. And that’s all down to Julian. 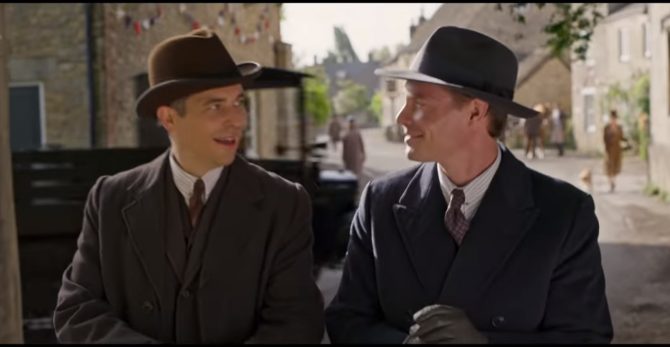 So if I’m being direct, this will probably be the last time you get to play Thomas. Will you miss playing him?

Well, we don’t know yet. The film hasn’t come out!

So hopefully, I get to play him again. I have to pay my mortgage. It could go again, but it’s all down to the audience response. If they like it, I’d love to do another one. I know most of the cast would love to do another one. So, we’ll have to wait and see. But of course, I would miss playing him. It was weird stuffing the series. Six years you get to know a character. You become famous because of your character. Then it’s gone all of the sudden. It just sort of dawns on you the day after: Oh my God, this fantastic ride we’ve all been on has stopped. At the same time, he’ll always be there. Because of Thomas, people know me because of him. I get offered other jobs now, and it’s because of my work on Downton Abbey. So there’s always that connection back to Thomas. Any future success I have is because of Thomas Barrow in a way. In that way, he’ll always be present in my mind’s eye.

Now, I’m curious. Were you ever advised against taking the role for fear it would brand you? There’s a lot of talk in Hollywood that actors who play gay characters will be forever cast as the gay character.

No, that didn’t worry me because of the complexity to him. He runs the gamut of emotions, which, as an actor, I saw a chance and said “Hang on a minute. Let’s see what Julian’s done here. I have a chance to play a really multifaceted complicated character, and show off my acting range.” So then people go, Wow, we’ve seen him be emotional and upset. We’ve seen him be angry. We’ve seen the whole range of emotions. There’s a lot of versatility within Thomas, so in that sense, it’s been nothing but a plus. Also, for me as an actor, the ambition is to come away from Thomas and to show people my versatility. So it was never a worry in my mind. He is too good a part. I just had to take it. 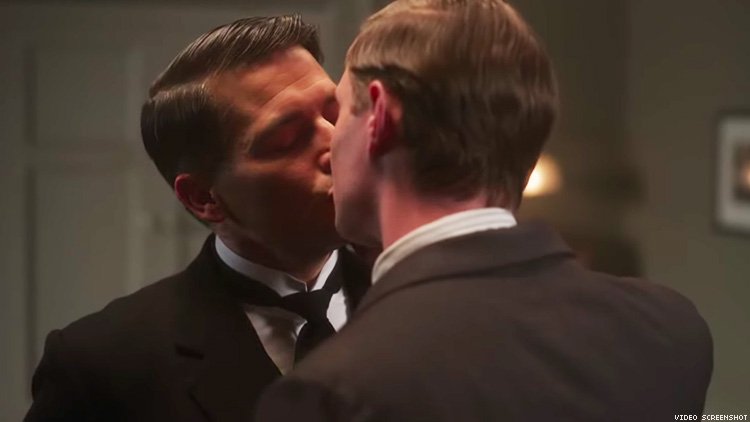 So last question. This is a bit silly too. You were declared the sexiest soap opera male two years in a row, in 2007 and 2008. I would imagine it’s a bit surreal being a sex symbol like that.

For most of us who will never know the feeling, what’s it like? Is it a lot of pressure?

I was amused by it all. I thought it was hilarious. The amount of sets I got of friends just ridiculing me for that…

I didn’t have delusions of grandeur. I was quickly brought down to Earth by my ruthless friends who sent a lot of WTF messages. “Who’d you sleep with? Who are they looking at?” It’s a bit of fun, and you can’t take it too seriously. I just laughed about it. My mates—there’s a word we use over here—I was wrenched by my mates for it for a long time. I just thought it was incredibly funny.

It’s not something I dwell on. Put it that way.