Almost 30 years ago, he launched his career by creating Rocko’s Modern Life, an animated series about a snarky wallaby and his friends that quickly became a cult hit. The show helped cement Nickelodeon’s NickToons block as a ratings winner, and propelled the network forward into the animation powerhouse it has become. After Rocko wrapped its fourth season, Murray went on to develop the hit shows Camp Lazlo and Let’s Go Luna, as well as the online animation network KaboingTV.

Now, Rocko and Murray are together again and irreverent as ever, reuniting for the Netflix revival film Rocko’s Modern Life: Static Cling. The movie follows the return of Rocko and his friends Heffer & Filburt to their native O-Town after a 20 year absence and struggling to adapt to all of society’s changes. To cope, Rocko launches a campaign to revive his favorite animated series, The Fatheads, only to discover that the creator of the show, Ralph Bighead (voiced by Murray), has become a recluse…and undergone gender transition.

How’s that for an update!?

Joe Murray managed to afford Queerty a few minutes on the eve of the film’s Netflix release to talk about how the world–and the show–have changed. Rocko’s Modern Life: Static Cling streams on Netflix August 9.

Thanks for chatting with us. So at exactly what point did Nickelodeon call you up and decide that Rocko and his friends needed a revival?

It was late 2015 or early 2016 the discussions started. I was busy working on my pilot for my PBS show Let’s Go Luna and it was quite a shock that they called. It was the last call I was expecting to get.

How did you feel? Were you on board right away?

No, not exactly. I didn’t really know where Nickelodeon was coming from with it, and I wasn’t sure I wanted to do it. I thought we said a lot with the original series and had such a great crew. What if we messed it up? I didn’t want any watered-down version of Rocko so a lot had to come together for me to move forward with it.

That’s understandable So, in terms of story development then, how did you go about coming up with a way to get Rocko back to O-Town, and what the new film would look like?

Well, it turned out to be perfect that our last episode of the series had Rocko, Heffer and Filburt blasting off into space. So, I thought, well what if they have been floating around space for 20 years, and come back to O-town to find all of the changes of the new millennium. And the story kind of grew from there.

This then begs the most obvious question. You voice the character Ralph/Rachel, as you always have. When did you decide Ralph would become Rachel?

I wrote in the story that the creator of The Fatheads went through a change in the last 20 years, and it felt like a natural progression of character for Rachel to find herself. Since the whole special is about change, it felt like the only way to go. Rachel wanted to make her transition.

Were Nickelodeon and Netflix on board with this right away? I can’t think of too many other transgender cartoon characters.

Nickelodeon had their initial reluctance. I think I kind of caught them off guard with it. 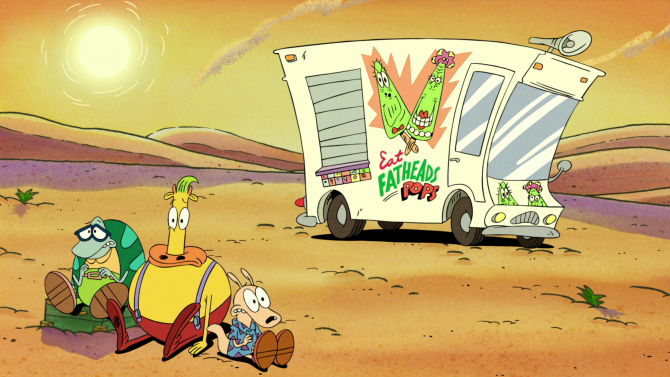 I said this is the story I really want to do. And they promised me we wouldn’t back off of anything the original Rocko would have done and then some. So, Chris Viscardi took it to the then president of Nickelodeon who signed off on it as long as we brought GLAAD into the picture to consult. I thought that was a great idea and we moved forward. By the time Netflix saw it, it was already baked in, but I can’t imagine they would have had reluctance.

Obviously, one of the major themes of the new story is the way the characters cope with change, almost to the point where the quest to revive The Fatheads becomes this sort of meta-comment on the movie itself. Rachel’s transition—and more importantly, the way Rocko and Mr. Fathead react to it—is something of a metaphor for that. Were you nervous about how fans of the show would react to Rachel’s coming out, or the way the show treats modern technology in general?

Well, the special was about change, so if anyone had any problem with the idea of change in all its forms, they are missing the point. Change happens. It’s the only thing that is for sure. Acceptance of impermanence is part of my Buddhist leanings. But just as Rocko gets upset that Rachel changed The Fatheads, there might be those that say I changed Rocko too much. But I doubt it. The way Rocko is structured, its designed for you to go along for the ride.

The other major element of that, of course, is the way several characters rail against Rachel and against The Fatheads revival. This mirrors much of the toxic fan reaction perpetrated by a small but noisy contingent of the audience. This is something we see with other reboots and revivals: Ghostbusters, Star Wars, She-Ra and the like. In a way, Rachel’s story is almost a preemptive rebuttal to that reaction. What is that toxicity about? Is it just a fear of change?

Nostalgia is a strange thing. It’s a celebration of something from the past, but if it’s presented to you in the present it is held up to very high scrutiny. People don’t like their memories f**ked with. But if someone is asking for some new content, they have to expect some new takes on it. We are all older with new stories to tell. The environment is different. Look at the positive change and progress the representation of the transgender community has gone through. Thank God we can move on and grow.

Agreed. Though as a creator yourself, I’m interested to know: do you think some of toxic fandom is a result of nostalgia addiction, or too many pandering shows/movies? Are audiences too used to too many in-jokes or too much fan service that somehow “validates” them?

I think there are many ways reboots and revivals are handled. Some are obviously for milking more money from the franchise. But some are done with the love of the characters and the fans who supported the show or movie. The Rocko special would not have happened without the fans of the show being quite active. The full seasons DVD of Rocko was a huge seller, and everyone made it known that there was still an appetite for it. As far as the fans themselves, I love them. My wife is a little afraid of them though.

Rocko’s message is quite powerful in that regard: be happy if the past was good, but let it be the past. There can be no future if things don’t evolve and change. I know in your past you have experienced both great success and great tragedy. For you personally then, how have you learned to let go of the past? How do you find your way forward, both as an artist, and as a person?

Yes, I feel I have had many chapters in my life. Some are very painful: death of my wife, my divorce. Some are amazing: my current marriage, and the birth of my 4 children. The one thing I did want to say with the Rocko special, that for the creators of shows, life is still in session and personal events are more important than doing a show. Some fans have trouble with that. But Rachel had her things she had to do. I had my things I had to do after Rocko. And life goes on. But everyone’s life stories have tragedy and success. It’s how we grow and how we have good stories to tell.

Any chance for more Rocko in the future?

I don’t know. I’ve made it clear that I’m open to talking about it. But a lot of stars would need to align for that to happen. I would say the chances lean to it not happening.

I’m still doing my PBS show Let’s Go Luna. I have several more episodes left on the latest order. But I’ve also just recently relocated my family to Belgium, so we are building a new life there, which includes getting involved with the European animation and television community. So, we will see what’s in store. I may have some more shows up my sleeve or I may retire on a farm. Who knows?