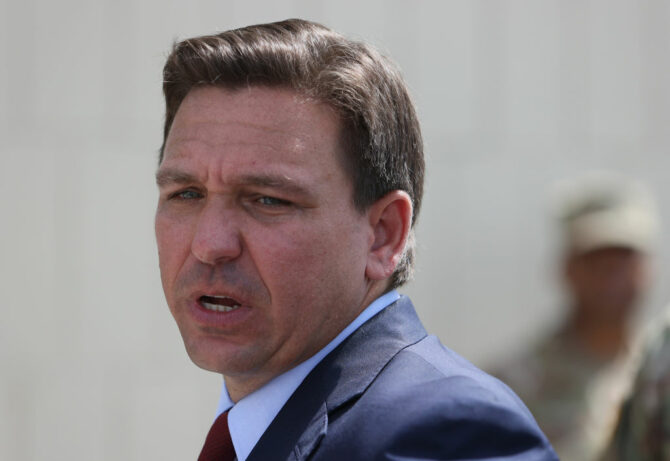 Florida’s pro-Nazi, anti-LGBTQ Gov. Ron DeSantis is currently being ripped to shreds on Twitter after he voiced his support for the archaic “Don’t Say Gay” bill that is gaining momentum in the Florida Legislature.

The bill, which was introduced by state Republicans last month is on the agenda for next Tuesday’s meeting of Senate Education Committee, would make it illegal for teachers to talk about sexual orientation and gender identity in Florida primary schools.

“Schools need to be teaching kids to read, to write,” DeSantis told reporters this week. “They need to teach them science, history. We need more civics and understanding of the U.S. Constitution, what makes our country unique, all those basic stuff.”

“The larger issue with all of this is parents must have a seat at the table when it comes to what’s going on in their schools,” he added, stopping just short of saying whether he will sign to homophobic bill into law.

We hate to be so cynical, but it seems incredibly likely DeSantis will sign it the second it lands on his desk. The guy holds a 0 rating from the Human Rights Campaign for his record on LGBTQ issues. He opposes same-sex marriage and nondiscrimination protections for queer people, and he supports “religious freedom” laws and barring trans athletes from competing in sports.

Can we pass a bill called “Don’t See GOP”, because I never want to see these stupid motherfuckers again.

If you want to ban an actual offensive word from Florida schools, may I suggest “DeSantis”

Instead of sitting idly by while Nazis in America make laws to persecute People of Color, LGBTIQA+ Americans, and *everyone else* who they HATE…

Cuz if you STILL don’t get it – it’s LITERALLY Us or Them!

The dick of the day trophy goes to sociopath Ron DeSantis for pushing the “Don’t Say Gay” bill—designed to make sure children in primary school get discriminated against for being exactly who they are.

Ron is the proud sewer of earth.#DickOfTheDay 🏆

The first time I said “I’m gay” out loud was to my 8th grade teacher. I was utterly terrified of anyone finding out, but I felt safe & protected. FL’s Don’t Say Gay bill would strip that safety from thousands of children. This bill will leave blood on their hands. RT & follow!

Republicans live in a world where kids having to wear masks to school is an unforgivable infringement on freedom, but having their sexual orientation marginalized through a “Don’t Say Gay” bill is totally fine.

Why does Ron DeSantis hate gay people and like Nazis?

Florida’s attempt to legislate “Don’t Say Gay” should be every bit as successful as Don’t Ask, Don’t Tell was.

Ron DeSantis and his “Don’t Say Gay” bill is intended to make Florida kids as hateful as their parents, who clearly don’t know what is best for them because they are bigoted Republicans.

Here’s a video of Pete Buttigieg talking about the bill, which he calls “dangerous”, on CNN this morning.