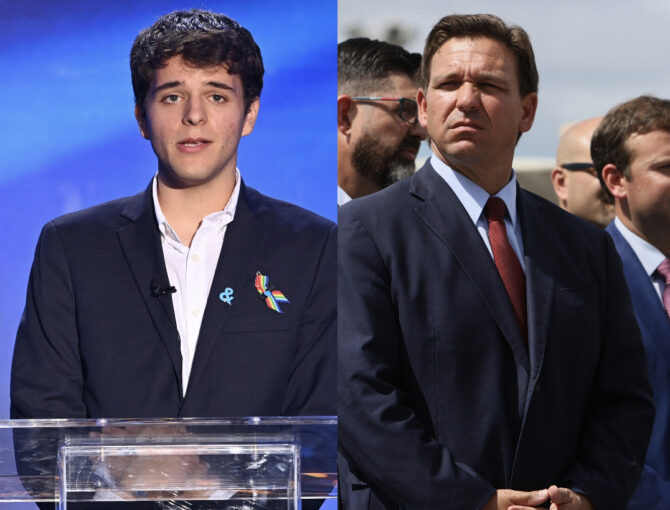 Florida Governor Ron DeSantis is an expert in harming his state’s youth; just within the past few months he’s signed the “Don’t Say Gay” bill into law, attacked transgender student athletes and scolded kids for wearing masks. Thankfully, Florida’s youth are fighting back.

Last night, queer teen activist Jack Petocz got to experience the Governor’s flagrant lack of care firsthand as DeSantis’ security guards kicked him out of an event for demanding an answer on DeSantis’ lack of action against gun violence in the wake of the shooting in Uvalde, Texas.

Growing up, I watched in terror as mass shooting after mass shooting occurred. Today, I asked Ron DeSantis directly, why he doesn’t care about my life and refuses to act on gun violence. Instead of answering me, he sent his security guards to kick me out. We deserve better. pic.twitter.com/u6qQWR6RI1

Petocz does anything but shy away from threats by authorities. In March, he was suspended from Flagler Palm Coast High School for leading protests against the “Don’t Say Gay” bill (and, reportedly, for handing out rainbow flags at one of them).

Just weeks ago, Petocz was honored at the 2022 PEN America Literary Gala, receiving the Freedom of Expression Courage Award for his activism in fighting the “Don’t Say Gay” bill in Florida.

Related: This Florida high school might want to think twice about messing with 17-year-old Jack Petocz

.@GovRonDeSantis wouldn’t tell me why he wants to put guns into the hands of dangerous people. Props to my partners in #GoodTrouble @tomaskenn @MaxwellFrostFL @Jack_Petocz @NewsCHill pic.twitter.com/zkk9p4a76U

I just asked @GovRonDeSantis to take action on gun violence so we can save lives. That we lose 100 people a day.

His response? “Nobody wants to hear from you!” We are dying and our Governor is too busy helping @RubinReport make money. pic.twitter.com/LUOWQq3kQU

After DeSantis’ latest move of trying to ban not only transition care for minors but Medicaid support for trans people of all ages, he will certainly not be seeing the last of Petocz and his fellow activists any time soon.