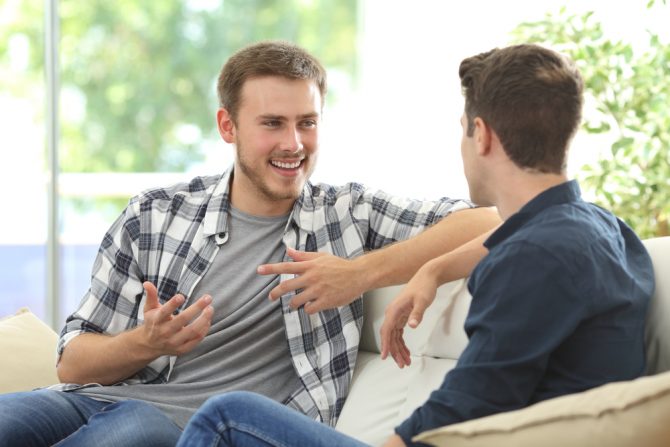 A gay man says his roommate, who is also gay, won’t stop making unwanted sexual advances and he isn’t sure how to deal with it, so he’s seeking advice from Rich Juzwiak over at Slate.

“I didn’t know how much he was into me until I moved in with him,” the man writes. “I was in a tight spot, and I reached out to him, and he offered me the second room in his apartment.”

The guys have been friends for close to 20 years. The man says he’s in a better place financially now and could move out, but “I am committed to sticking with him as a roomie.”

“He continues to tell me how much he wants to suck my d*ck. It’s worse when he gets more beers down. I’m not into him. I did think he was cute 20 years ago when we met. Not so much now.”

The man says his roommate is “a wonderful person” and he loves hanging out with him, but he just doesn’t want to have sex with him.

He now wonders: “Should I just finally give in and get the one-sided blow job? Or continue to hold my ground and tell him that we’re just great friends and that could ruin what we’ve got going?”

In his response, Juzwiak cautions to man to get out while he can.

“Letting him suck your d*ck will likely make him want it more, not less,” he says. “He may even feel entitled to it after that, preying on your ambivalence and forcing you to come up a reason why you let him have it then but not now.”

Juzwiak encourages the man to be more assertive.

“There’s no reason to accept a blow job out of mere politeness,” he explains.

Being polite, he says, “is listening to your roommate talk about his day,” not letting him do, well, that.

“He’s harassing you,” Juzwiak concludes. “He may have been kind to you in the past, but now, not so much. Consider moving out.”

What advice would you give this man? Sound off in the comments section below…